Rivian is a company that is preparing to release onto the market an electric pick-up truck. It bought a plant formerly used by Mitsubishi Motors in Illinois to make its vehicles. Investors have been joining as they see the progress being made. The Sumitomo Corporation of Japan took a share in 2017 and in 2019 both Amazon and Ford also invested.

Large pick-up trucks are a huge market in North America but no one knows for certain how electric pick-ups will go. Regardless, Rivian seems to be a carefully planned operation building what is otherwise a fairly conventionally designed truck. Tesla is going the more outlandish route with regards to the design.

The other main difference between the Rivian and Tesla pick-ups (apart from the Rivian being on the road much sooner) is the price. The Rivian RT1 is to be US$69,000 while Tesla is saying US$40,000 for its Cybertruck. That's a huge difference. I'd normally take a Rivian any day, but the price difference has me scratching my head.


So Rivian and Tesla will be directly competing at some stage in the future. Tesla has a 'guru style' leader that devotees are very forgiving when vehicles are not delivered anywhere near on time. When the Tesla Cybertruck will actually arrive is anyone's guess (claimed late 2021). First deliveries of the Rivian R1T p/u is expected late 2020 (The R1S SUV pictured below is expected in 2021). Then again the Ford F-150 is US$41,000 and is available now but that would be missing the point.

Tesla certainly did open up the electric car market while ICE car makers for the most part dawdled. Stories about the CEO Elon Musk paint a picture of a man on a mission. He is also entering into a notoriously challenging industry, where tombstones of brand names abound, for those that are with us no more.

The latest reveal is a pick-up truck. The design reminded me of my doodling as an eight year old boy, dreaming of one day being a car designer. I knew my efforts were amateurish, but no one within Tesla seems to know what a child's sketch looks like. Instead, this ridiculously childish prototype was embarrassingly presented to the world. If that wasn't enough, efforts to show how robust the car was came unstuck when both side windows were broken when hit with a heavy object.

Tesla wants to be a creditable car manufacturer. It's done OK so far but this latest effort to me has set off alarm bells. I wonder if Elon listens to people or that he has such trust in his ability to succeed that he steam rolls along as is nothing can stop him. Another start up is beating him to the market with an electric pick-up truck, which may have prompted this seemingly hastily arranged display.
Posted by RayCee at 07:42 No comments:

A song says everybody wants to rule the world. Well, I don't want to but everybody wants to make at least one SUV. Rolls Royce, Bentley and Lamborghini are already selling them with Ferrari in the process of adding one to their range. Everyone except Mclaren, who want to focus on super sports cars. They probably don't want to rule the world either.

A few years back Aston Martin obtained a large site from the Ministry of Defence in St Athan, Wales which had aeroplane hangars as part of the deal. The hangars have become part of a production facility for the newly released Aston Martin DBX SUV. Wales is about to become the latest country to be a vehicle producer.

Looking at it in pictures it looks the real deal, beautifully styled and really posh. Not the car I'll be putting in my garage anytime soon but I still appreciate well executed design. It won't be a bargain buy but it will help Aston Martin with volume and more importantly the bottom line. 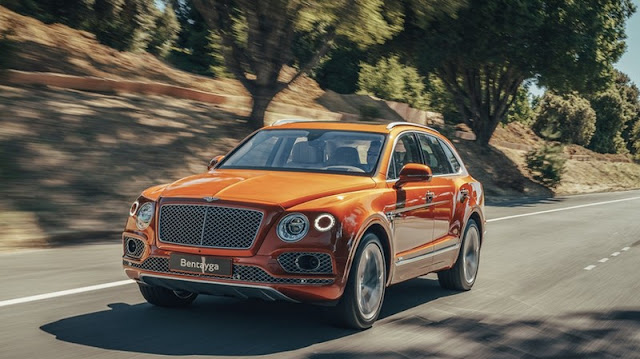 The company was founded by W.O. Bentley in 1919, who had been through an apprenticeship in the railways. When it went into liquidation in 1931, it was acquired by Rolls Royce. Bentley was eventually sold by then owner Vickers to VW in 1998 while RR then went to BMW.

Bentley cars conjure up in me thoughts of sporty, luxurious cars cruising along the Côte d'Azur or down a boulevard in sunny Los Angeles. The company's racing heritage no doubt has something to do with that. They are made at Crewe, Cheshire in England not too far from where I entered this world.

Today the four models made by the firm are the Continental grand tourer and Flying Spur 4-door variant, Mulsanne saloon and Bentayga SUV.  I have to say I'm not won over by design of the SUV but I have never seen one ion the metal so that opinion could change.

VW would like Bentley to be making the company more money, but then Bentley didn't need dieselgate. It seems to have cost Bentley the Korean market, where the marque was quite popular. As to why that should be makes no sense but Korea does seem to need little prompting to show its import averse leanings.


André-Gustave Citroën started making cars in 1919. He took advantage of mass production pioneerd by Henry Ford to become a volume producer of cars. Citroën developed a reputation for being innovative too. However, it was sometimes under financial pressure and eventually filed for bankruptcy at the end of 1934. Michelin became the majority shareholder.

After World War II, the 2CV was introduced and quickly became a very popular model. Then in 1955 the technically advanced DS was released to much acclaim. Despite successes, the early 1970's were problematic for the company and it again went into bankruptcy.

To protect jobs, the French Government arranged talks that eventually led to PSA (Peugeot) taking control of Citroën. Synergies were achieved between the car brands but in doing that, Citroën's uniqueness and innovation were sacrificed.

Today Citroën moves along in a crowded mainstream car market, doing well enough but not outstandingly. It's recently lost ground in China and the DS premium brand (from 2010) has been not very popular. Had Citroën been moved upmarket after 1974, maybe now it would be accepted as a premium marque in its own right. The problem was jobs would have been lost in the process, something the French government would not have tolerated.

Citroën has started releasing crossover cars which have been well received. It has a loyal following, mainly in Europe where 85% of its vehicles are currently sold. For more on the brand, simply click on the links below for past articles I have written.