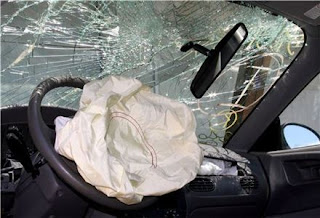 One song says love changes everything, and so does money. Corruption is rife in the world today and money is so often the motivation. Even human life can be a secondary consideration in the quest to gain or protect money.

Cars are convenient but also dangerous. Safety features are important to consumers and modern cars are full of  such life saving features. I find some such as lane departure warning as quite laughable but most are welcome additions. I must say as one who has always used seat belts I thought airbags were for Americans too lazy to buckle up (no offense intended). However, they do add to occupant safety so I've been won over.

Which leads to the point of the article. Japanese firm Takata changed the main ingredient for its airbags from tetrazole to ammonium nitrate in 2001. Ammonium nitrate provides more bang in a smaller volume than other propellants, which allows the company to offer a more compact device to manufacturers. It was also cheaper to make. However, they have in a few cases caused death by exploding and sending pieces of the device into the car's occupants.

Employee emails show that there were “dire warnings about safety and quality lapses years before Takata Corp would fully acknowledge the threat posed by its defective airbags,” according to a report by the Senate Commerce Committee. Senator Bill Nelson, a Floridan Democrat, says it now appears that Takata was aware of “serious safety and quality control lapses” in its factories as early as 2001.

Company officials debated the data regarding the product and testing of the inflator was manipulated to cover the issues. Nissan, BMW of North America and Ford have accused their airbag supplier Takata of fraud in a lawsuit to cover losses they incur because of its faulty inflators that have been linked to at least 17 deaths worldwide. Court documents filed in United States claim five automakers were aware of potential defects but continued using Takata’s airbags because they were less expensive. The allegations involve Ford, Honda, Nissan, Toyota and BMW.

All in all a sad tale of a business trying to get a competitive edge but getting it wrong and trying to cover it over. Did they really think they would get away with it? The cost of owning up would have been huge. It got worse by not coming clean. Money changes everything.
Posted by RayCee at 17:28 No comments: