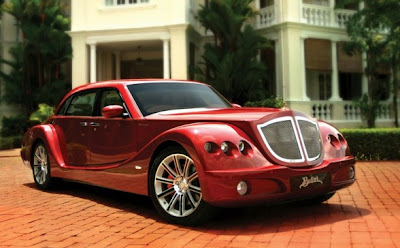 Motoring has always had its eccentric brands and Bufori is no exception. It's a Malaysian firm making old style cars. The operations started over 20 years ago in Australia, until the headquarters and production were transferred to Malaysia in 1994. Bufori is specialised in building cars in the classic design of the 1930's, incorporating state-of-the-art technology.

The current model is the La Joya, something like a Morgan car but not as nice (I think). The new model is the Geneva (pictured). Each of the Geneva vehicles moves through 24 production stages and requires more than 6,000 man hours to create. So they are not cheap. The are only sold in a few countries but expanding slowly.

I'd have to say I would never own one, but I could see why some may be attracted to its olde worlde charm with a modern twist. It would look smart parked outside the Raffles Hotel in Singapore. A very unusual car.

The bottom line: It certainly adds variety to an all to often predictable motoring landscape.
Posted by RayCee at 15:54 No comments: