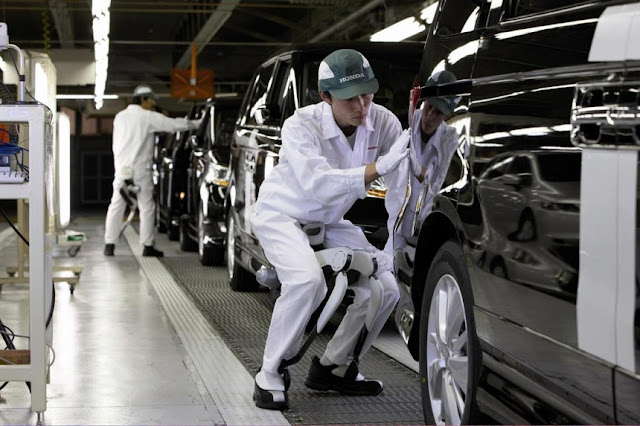 Japan is seen as an industrial miracle of post war years. They set about systematically improving their products and searching for markets to sell in. They cooperated in a way the west would think was uncompetitive. It worked and Japan became a leading car making country.

As volumes reached numbers that could lead to a consumer backlash overseas, they set up factories to avoid that. If nations restricted car imports, they built factories there too, to get a vice like grip on those markets. That is why you will notice a drop in Japanese production from the middle of the chart, overseas plants opening. The big fall in commercial vehicle numbers will be because of production being moved to Asian nations.

Summary: The careful and diligent way Japan approached production and export was learnt from the West, but not done in the West. Despite high costs associated with car assembly in Japan, efficiencies and a government policy of keeping the Yen undervalued has allowed a large number of vehicles to continue to be made there.

Data source: JAMA.
Posted by RayCee at 06:34 No comments:


The car market in France has been subdues for the last few years. Seeing as the big three French car makers rely so heavily on local support, it has hit them. Added to that they have collectively slipped just below 50% of total sales. Renault had 40% of sales in 1980, 30% in 1994 and now under 20%. That has been a common pattern for many top selling makes in Europe.

VW sales held up well in a difficult market. They must have some very good diesels to do that. Renault's Dacia established itself as a popular brand at this time. Toyota held its sales volume but was outdone by its rival Nissan who overtook them. US duo Ford and Opel didn't do nearly so well.

Data source: CCFA.
Posted by RayCee at 09:41 No comments: