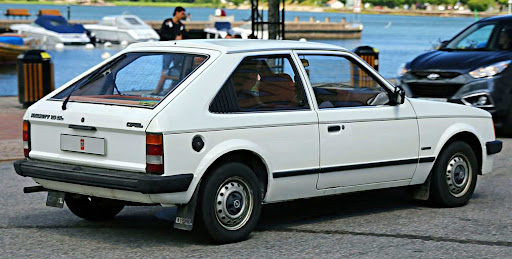 Opel and Ford were brands that invested heavily in Germany and both sold well there. For many years they were second and third best selling brands behind VW. Occasionally Mercedes got past Ford into third but would fall back again. In the UK Ford always outsold Vauxhall (Opel) but in Germany, it was the other way around.

The chart immediately below shows market share and goes up to 20%. The graph covers from 1977 to 1999 and Opel (red) was consistently in the ascendency compared to Ford (blue). What you can't see below is that Mercedes passed Ford again in 1998 and apart from one lapse in 2009, stayed ahead of Ford until today.

In fact, we can see that toward the end of the graph both Opel and Ford were declining in market share in the country which raises the question as to whether that slide was to be arrested.

Below we see from 2000 to 2021 on a larger scale of 12% share so don't compare the two graphs by physical size but by the percentage numbers on the sides.
Ford leveled off from 2000 and held its share consistently. Opel's decline continued to 2012 when there was a slight uplift. By 2012 they had both been pushed back by Mercedes, BMW and Audi to fifth and sixth. Apart from a brief moment for Ford in 2019, neither have since matched the three marques that had passed them.
Ford overtook Opel in 2017 and in that same year, Opel was acquired by PSA. Ford then had a mini surge to 2019 then suddenly a change of policy has sent Ford plunging to seventh place by 2021. Opel was seventh in 2020 but is back up to fifth for 2021 in a possible revival of fortunes. 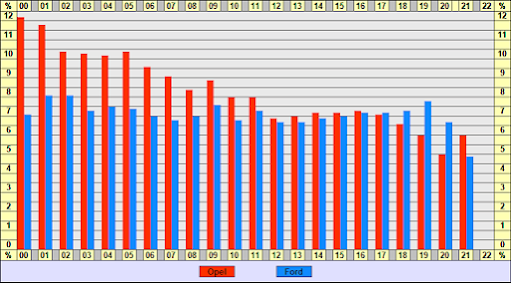 So what do we learn from all of this? That mainstream manufacturers in have a lot of competition and they have to carefully guard their reputation by offering a strong, consistent product range.
Opel lost its reputation as a top notch mainstream brand and ended up chasing volume to keep factories busy, but in the process became unprofitable. PSA is working hard to turn that around, focusing on product. That is showing signs of success but it's not a quick fix.
Ford has done better in regard to maintaining a competitive range but is now following a global strategy of moving away from passenger cars, which will impact on the number of units sold. It needs a strong SUV / crossover range if that is all its passenger car range will be comprised of. 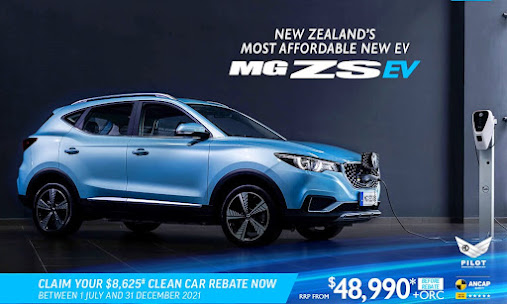 There is a push for greener cars in NZ. Electric cars already get a rebate but there is to be a feebate scheme introduced in April 2022 where low emission vehicles (-146gms) get a rebate, those in a middle band (146-192gms) nothing, and higher emitting ones ( +192gms) a fee. Vehicles over $80,000 can be charged a fee but not earn a rebate. Used imports are included too but not to the same degree.
It will be interesting to see how this works. Will sales of high emitting vehicles boom just prior and low emitting ones (not electric, which already are incentivised) go quiet as that date approaches? One would think so but that would be a one off scenario. For now, let's look at electric car / LCV sales for the past five years and nine months. I've only focused on pure electric and hydrogen, not the other variants which collectively sell in larger numbers. Heavy vehicles are also not included.
Registrations for electric cars and light commercials have grown from 87 to 4,266 (the latter nine months) in quick time. Tesla had a huge September 2021 but will it continue for the remainder of the year? Either way, 2021 is already 178% up on 2020.
Hydrogen is shown below and that hasn't exactly been a rip roaring success. Refueling infrastructure is an issue for now but maybe the feebate scheme will help. I have always felt there is more potential for fuel cell rather than electric but for now electric well ahead due in no small part to fuel accessibility.
Electric propulsion for cars is still small in NZ but is moving rapidly forward. More brands are getting in on the act but the pie is growing quickly enough for all to get a decent slice of it. Hydrogen fuel cell is not an option for the time being. 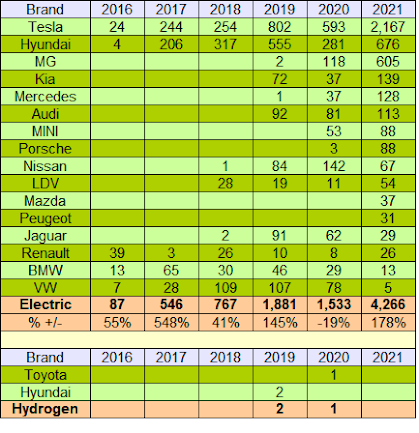 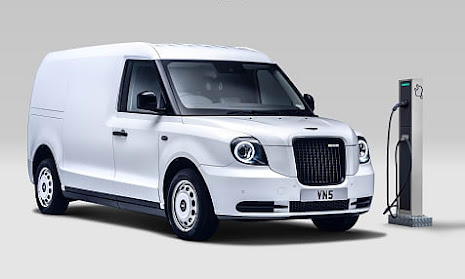 Electric vans that travel within a confined area, doing a daily mileage not too demanding are an ideal fit for electric propulsion. I'm surprised more haven't gone that way but the initial cost of purchase is probably a major factor in that. If a van requires a heavy payload, then fossil fuel vans again are the better bet. So what are some of the benefits of an electric van?

Rebates. Depending on the country, there are incentives to entice buyers.

Image. Being able to claim a clean fleet of vehicles is a big plus.

Charging. It can be done at the end of the day at the place where the van sits while not in use.

Workplace environment. For a driver spending all day in a van, it's a more serene place to be so less stressful.

Ease of use. They have instant torque so nippy in traffic and with no gears, it's simpler to drive as well. Just accelerate or brake.

Future proofing. Depends on where you live but if restrictions are put in place to disadvantage vehicles based on emissions, then that one is already sorted.

Summary. They are not the ideal solution for all van operators but for those doing work suited to such a van then they are a serious alternative to be considered. 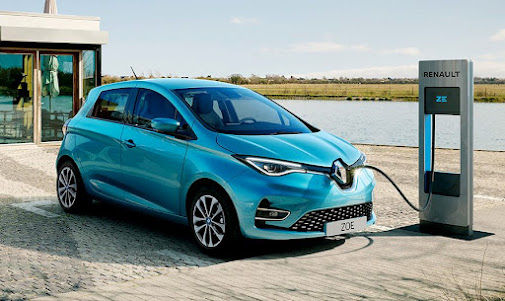 Data is hard to get for Norway once one drops below the top 20 brands but I did manage to cobble some numbers together which are as accurate and as in as much depth as I can hope for.

Registrations for September were +16% and +35% YTD. The strong sales for the year so far reveal the strength of the market in 2021. Looking at the historical sales, you wouldn't think there were any issues facing the car industry, such is the buoyancy of the registrations. The '+/-' column below is comparing market share variance for nine months of 2021 with a full 2020.

Tesla bounces around not only from month to month but also year to year. It is currently the top selling brand but who knows whether that will be so in three months' time. Toyota is strong in hybrid technology and that is working for it in Norway as it moves into second place. VW dropped from first to third. 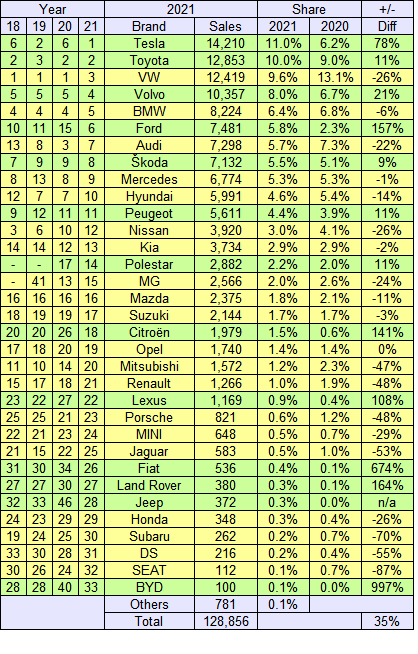