The 1990's were a continuation of the previous decade, with US car makers losing production volume as the Japanese companies moved in. The truck/SUV side of the industry was roaring ahead and profits were better there too. That is where the US automakers were heading, increasingly leaving the car side to foreign brands. So production numbers are not as bad as they look if you factor in the swing away from the traditional car.

Honda moved to third and Toyota fourth, with Chrysler now fifth. Nissan was one brand going the other way, with production shifting to Mexico, another trend to affect car making numbers in the USA. VW made all its cars south of the border.

Below numbers are in thousands so three zeros need to be added.


Things were changing in the 1980's. Trucks were making a mark (which are not included here) and the Japanese manufacturing invasion was underway. Total car sales were declining and AMC had gone, leaving just the three local car makers. While Ford and Chrysler actually managed small increases, GM's production volume was much lower.

While the four Japanese car brands that had entered domestic production were still in their infancy, the writing was on the wall. They had a better reputation for reliability and were now using US production to gain acceptance. They were no longer taking jobs, but creating them.

Production numbers below are in thousands, so you need to add three zeros.

Škoda is a brand that is going well. At 21st for worldwide production, there is plenty of scope. Volumes are not helped by the fact that it is only strong in Europe and China. I think parent VW has missed an opportunity by not using it more. Renault has benefited immensely with Dacia and while Škoda isn't the same sort of budget brand, it still is more low cost than VW.

With over 60% of production in its home nation and much of the rest in China, Škoda is limited in its spread. It seems VW is the brand that the parent company wants to push more. Yet Škoda is more profitable and I believe that some within VW are not happy about. I read somewhere it was to do with the belief that Škoda was getting VW technology too cheaply.

It will be interesting to see how the emissions scandal will affect the Czech make as its diesels are affected too.

Data source: OICA.
Posted by RayCee at 15:34 No comments: 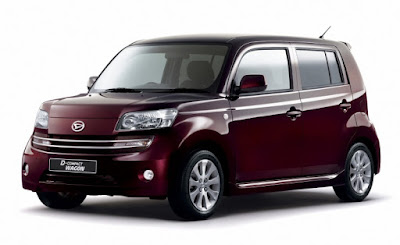 Coming in at 20th is Daihatsu, part of the Toyota Group. It was a world player years ago but has steadily been pulled back to the point it is now only sold in Asia. I guess that it overlaps with Toyota cars anyway to a large degree and marketing small vehicles profitably is a challenge.

Daihatsu cars are also made by a Malaysian firm Perodua and are very popular in that nation. Just under 200,000 of them rolled off the production line in 2014. I don't add them to the Daihatsu figure as Daihatsu are a minority shareholder, so they are made under licence by Perodua. The combined the total would pass Mitsubishi's worldwide total, which shows how popular the big D is in Asia. It doesn't even rely on China to help its production numbers.

Daihatsu is a very reliable car make too, so a shame they have pulled out of so many markets. I bought a new one ten years ago and the salesman said it would only need routine servicing, they don't break down. I thought he exaggerated, but it hasn't had one problem in that decade. Mechanical simplicity is part of the reason.

Data source: OICA.
Posted by RayCee at 07:20 No comments:


The 19th largest car producer is very much a made in Asia brand. It used to share a plant in the Netherlands with Volvo but found going it alone too much and closed that. It also had a plant in common with Chrysler in the US but now that it tries to keep it going without a partner is again not cost effective, so the US plant is to go as well.

That will leave virtually all capacity in Asia. That isn't a disaster but will work against the company being a global success. There are benefits to having factories in a region that you want to be a big selling car maker. Countries such as Thailand will be an important part of the picture as an exporting hub.

However, Mitsubishi is a stand alone car maker and its hard to see where it goes from here. Maybe Asia/Pacific will be enough to keep it viable with marginal presence in other regions. Only 1.5% of all cars/LCVs made is challenging for profitability in this cash hungry, volume driven industry.

Data source: OICA.
Posted by RayCee at 15:52 No comments: