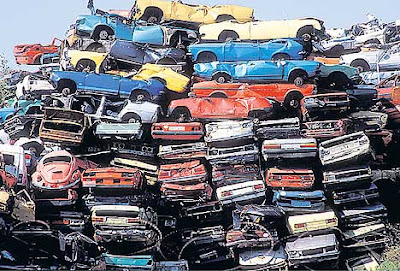 In Europe, governments have tried to stimulate car sales with incentives to get people buying them in greater numbers. The German market has gone through the roof, such is its success. In other markets the reaction has been more moderate, although these schemes do get Joe Citizen into showrooms in larger numbers. Some manufacturers have gone beyond what the government offers; to sweeten the deals even more. The terms surrounding the enticements favour smaller and more environmentally friendly cars.

The US is embarking on a 'cash for clunkers' deal now and it will have some success for smaller cars, most of which I assume will be imported. The Korean car industry will be rejoicing, as it already has scored well in Europe over this and should do likewise in the US of A.

I cannot help but think that unless economies strenghen quickly, the slump after these deals end will be large indeed. I also wonder about the environmental benefit of encouraging more cars on to congested streets. The downturn has actually been good for the earth. Making more cars isn't. So it seems what is good capitalism is not so for the planet.

The bottom line: What a mess man has got into.
Posted by RayCee at 09:24 2 comments: