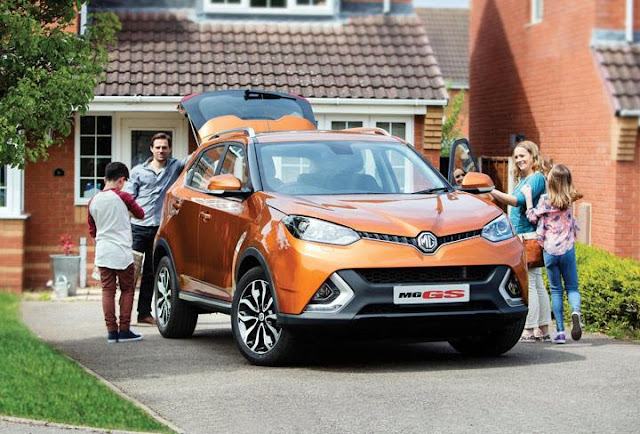 I find the China car giant SAIC's UK operation interesting, based at Longbridge, Birmingham, UK. They have a design centre there, which you can learn more about by clicking here. The interesting part is how they make cars there also (click here for an earlier article).

It started in 2008 when MG TF production restarted but only 900 cars were made over nearly three years. Then the MG 6 GT 5-door hatchback was introduced, soon followed by the 4-door (Magnette). The MG 3 super mini began in 2012, and by 2014 there were some 400 people working there, up from about 200 when production recommenced. Now the new MG GS SUV is being launched about now (I wrote about it here), which should broaden the brand's appeal. It will be imported fully built up from China.

Dealerships have been added steadily and now a sizable number have come on board. A list of those can be seen by clicking here. It's taken a while to establish a network but more models and a determination to see this through by SAIC will have helped dealers to make the decision to join.

I expected them to lose heart and disappear after a few years of losses. However, the whole process has been handled with patience and steady progress has been the result. The car assembly is from kits, so tooling costs haven't been a huge cost. Labour is probably the major UK component.

It amazes me that in the 21st century, where everything is hurried and has to be of enormous scale, this small assembly operation exists at all. Yet it is working and is growing. No attempt has been made to reach outside the UK for sales but with so much to do within Britain, I guess that is not yet a priority. As a cheese advertisement in New Zealand says "Good things take time".

The sales data below is about as good as I can ascertain. If anyone can add or clarify the data, please do so with a comment or on rdc1234@gmail.com.

The Kuga now has established itself as a popular model in the range. The Mondeo has fallen from 17 to 6% of Ford cars, quite a drop. Ford sell eleven models categorised as passenger cars so the 'Others' figure has increased. In 1965, sales were based on four models. We want more variety and many more segments exist today.

Ford seems likely to reain the best selling brand in the UK for the foreseeable future. It doesn't take the same market share as it once did and no brand ever will, again. Those days are over. Much more choice will guarantee that.


Ford was losing it's vice like grip on the UK market. One source said it was due to pulling back on less profitable sales and fleet buyers being less likely to buy from a few models, with a more liberal attitude to choice becoming the norm. Whatever the reasons, Ford was shedding market share at a consistent rate.

Below sales are in thousands, so add three zeros. The smaller number to the right of each model column is share of the Ford total. The one exception is under 'Total', where the figure shows the share of total UK sales. Ford went down between 1995 to 1994 from 21% to 14%.

The Focus, Fiesta and Mondeo were dropping while new models such as the Ka and C-Max were not selling in sufficient volumes to make up the difference. Consumers were widening in their tastes and premium marques were growing. However, the only other brand near Ford was GM Vauxhall which was managing to hold on to its share of the market.