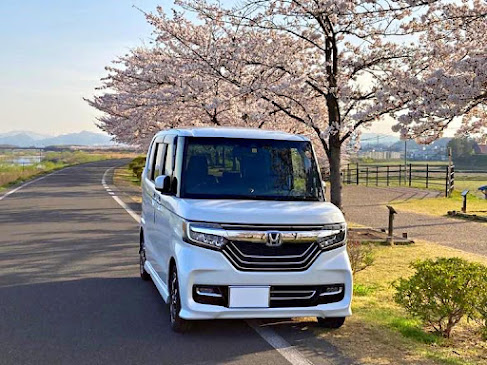 The Honda N-Box beat the Toyota Yaris/Cross combo into the top spot. There is possibly a stock shortage that created such a seismic shift in fortune. Still, Toyota is still the main brand even if it has lost bragging rights as the best selling model. Mind you, I think the Yaris and Yaris Cross should be separated anyway.

Below yellow is Toyota and Daihatsu, all others aqua. Import brands are nowhere to be seen. The '21 column is the ranking for the whole of that year. 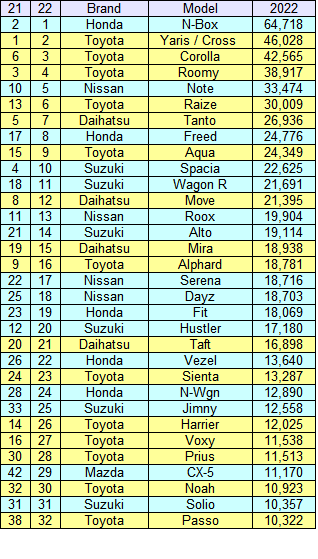 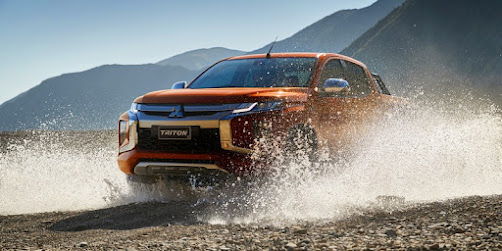 NZ's obsession with pickup trucks was only heightened with a tax on vehicles with higher emissions and rebates for ones that are less so, especially electric. Five of the top seven selling vehicles were high emission utility types and probably getting enough stock was the biggest issue.

The Ford Ranger is always at the top but this occurred with a model changeover which wasn't the best timing for them. So Mitsubishi's Triton - which isn't the most preferred ute here - seemed to have got the stock and made a unique appearance at the top of the list. Another to benefit was the Isuzu D-Max.

Tesla got to fifth with its Model 3 and MG is offering strong value and a long warranty to boot. The Toyota Corolla has been an NZ favourite for many decades but isn't even on the chart. In the chart below, the colour yellow represents brands associated with Asia, purple the USA and aqua Europe. The '21 column shows the ranking for the whole of that year. 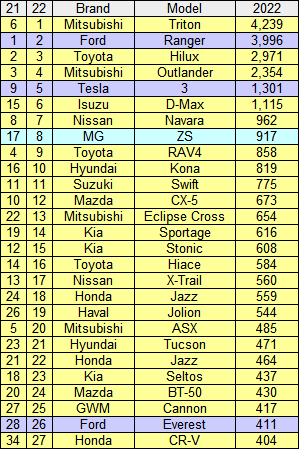 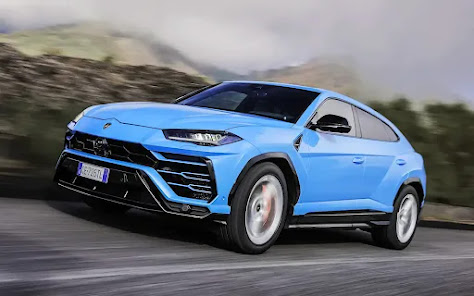 As a marque that goes head to head with Ferrari, it has to have a point of difference to be relevant. For me, it's a more flamboyant, ostentatious style that defines it and gives that unique appeal. It's not something I'd ever go for but some do.

Production dropped 16% in 2020 and lifted 15% in 2021 so a nice turn around although not quite up to the record 2019 year. The Urus SUV accounts for two thirds of production. The flagship sports car the Aventador is down to under 8%.

Regional deliveries are put under Audi's figures by the VW Group. Lamborghini independently reported 3,250 sales in EMEA (Europe, Middle East, Africa), 2,915 in the Americas and 2,240 in the Asia/Pacific region.

Probably an area of the market that flies under the radar as private buyers are obviously not generally considering purchasing them. However, an important part of VW's operations. The Transporter T6 is the mainstay of the LCV division. VW moved the Saveiro light pickup over to passenger cars a few years back but I have kept it here.

Regional deliveries: Europe is the main region for LCVs. My stubborness in keeping the Saviero in the category saves it from being even more one sided. I would have expected this division to be less reliant on Europe. 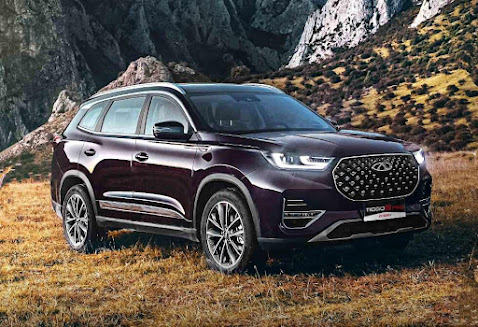 Registrations for the first three months of 2022 were -12% on the corresponding period of 2021. The 'Diff' figure compares three months of this year with the total 2021 share. Figures are distorted by supply issues but also the fact that no imported cars are included. Most brands are unaffected but import premium ones are. At the luxury level, they miss out 100%.

VW has been falling for a few years now but so far this year it has arrested the decline. Toyota is inexorably closing the gap between the two. 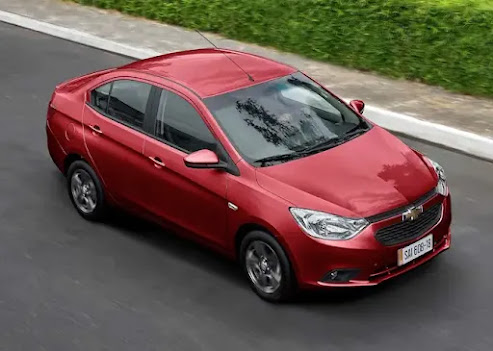 I don't usually do data for here as it isn't quite as many brands are not revealed but they only represent 1.6% of the total. Sales were up 39%. The +/- Diff column in the chart below shows which brands increased or decreased their share, so many that had increases in sales will show a negative result below.

Chevrolet is comfortably in charge, with Kia taking a knock in market share. Chery arrested a gradual slide in a decisive manner. Chinese generally brands did well. 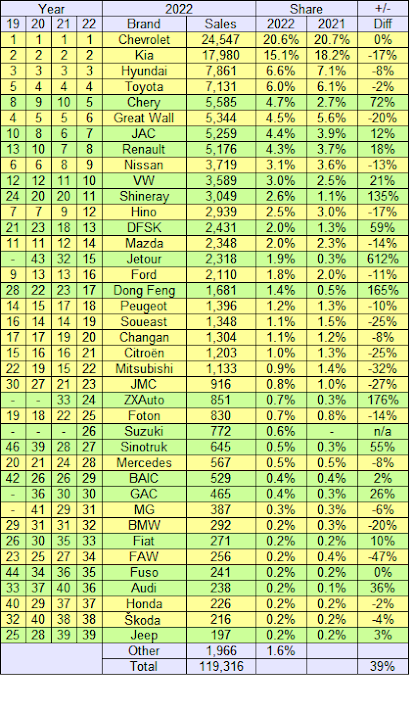 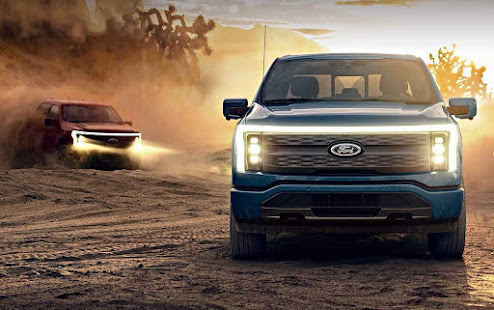 The large pickup reigns supreme on the best selling list. It is rather close at the top but supply will no doubt be playing a part in all this. The US dominates the pickup segment, fight in the SUV arena but waved the white flag when it comes to passenger cars. USA brands are purple, Asian yellow and...that's it. European marques are mainly confined to the premium level. 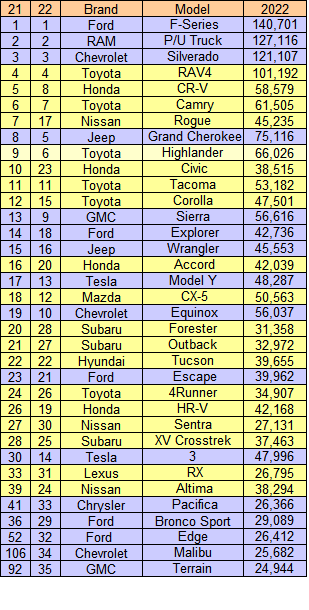 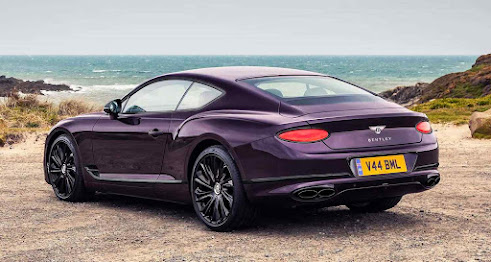 Bentley had a cracking year with production volume up 38%. The Mulsanne may have retired but demand produced a record year. That helped profit along as well. The Bentayga took 40% of the total, the Continental a third and the Flying Spur just over a quarter.

Regional deliveries: There is a fairly even spread of deliveries across Asia/Pacific, Europe and North America. They all enjoyed healthy increases too. 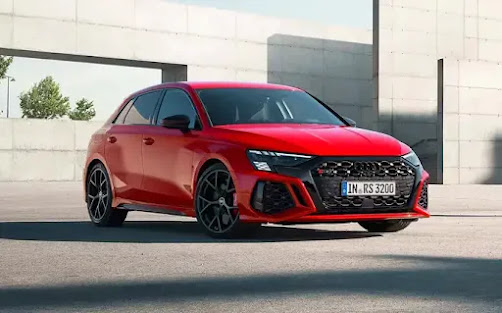 If asked where are Audi cars made, how would respond? Germany obviously. The UK as they sell so many there, especially around the London Home Counties. Wrong. The USA? Wrong again. We can pass on the guessing as the data is below.

Nearly 40% are made in China, in five facilities no less. In fact, Changchun is the most prolific plant within the company. Next is Germany with 29%, in three plants and Ingolstadt is the largest as well as the headquarters of Audi.

After that, it's individual plants in seven other countries. Brazil closed in 2020 and with the size of the output, better to import built up cars. India remains despite its limited size but I believe more assembly rather than production. 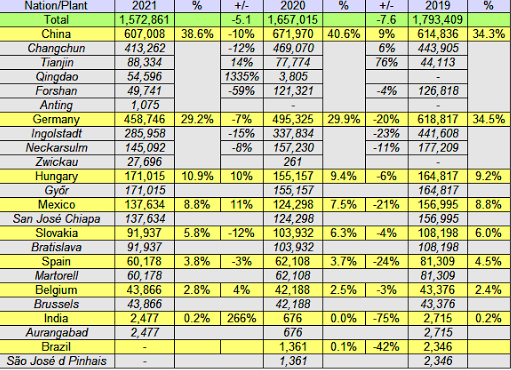 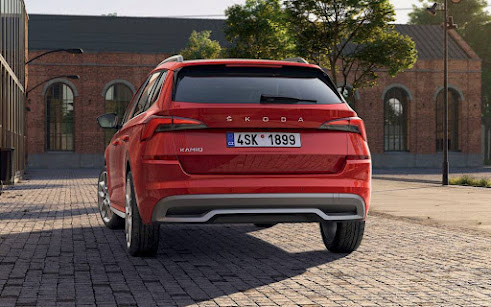 Production was down 24% in 2020 and a further 15% in 2021. Profit was up so that's something to smile about. The Scala model passed the Octavia which has now had two years of substantial falls. A new model last year and another this year has expanded the range nicely.

Regional deliveries: Europe is the epicentre of Škoda's sales and just got more so. China had a major reduction in units delivered and that impacted on overall volumes. 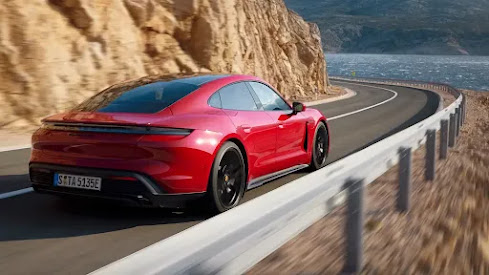 After a small 4% drop in production in 2020 to a +8%  a year later is a good result. I can't help but feel that the profitability of the marque helped in getting some extra semiconductor chips. The famed sports car brand relies heavily on SUVs although the 911 sports cars did have a good year.

Regional deliveries: Typical of the VW Group as a whole, Asia is such an important part of the sales success. Again deliveries exceeded production and passed the 300,000 mark. Stock levels must be getting very low.

Production was down 8% in 2020 and 5% in 2021. Not large numbers but with profit up in 2021, hard to argue that it's a poor situation to be in. Both leading models are SUVs and any manufacturer who decides to ditch that category of vehicle would be foolhardy. The traditional passenger car/wagon is struggling. 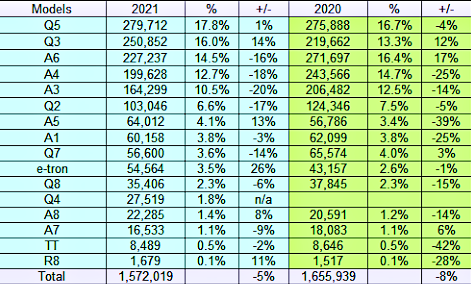 Regional deliveries: This includes Lamborghini. They are some way higher than the production numbers so is it a case of reduced inventories? Audi even managed to increase sales by 2%. Asia/Pacific was the only region up in 2020 but the only one down in 2021. 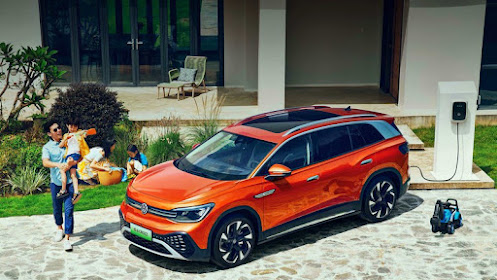 I've already posted a couple of articles on VW Group. Production is down but how is the bottom line? Has it impacted profit? Let's see. Gowing from the largest in terms of volume down. Sales and Mill € both need three zeros added.

VW Car: Sales may have dropped 116,000 units but profit grew from €160 per car to €921. There could be various reasons for this like reduced inventory or pulling back on less profitable sales as two examples. Whatever the reasons, quite an upturn.

Porsche: Profit is a consistent result for the marque. Profit per vehicle went from €4,000 to €5,000 which was high even for this division.

Summary: Profit doesn't always come with volume as sales dropped and the black ink followed. It will be interesting to see how 2022 goes as the industry is going through challenging times. Thanks to the VW group for its transparency.
Posted by RayCee at 20:00 No comments: 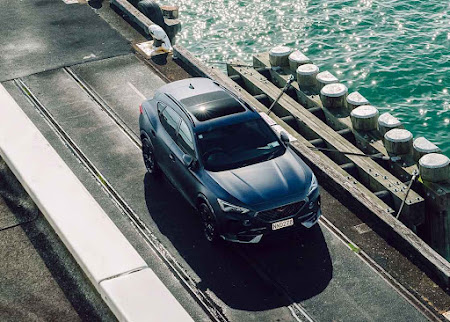 SEAT has been a problem for some time for VW. Making it a profitable operation is the task at hand and the lack of sufficient volume seems to be a major hurdle. Recently, the Cupra brand was created as a performance wing to presumably lift the company's sporty image as well as improve margins.

Cupra: After a few models were sold under the SEAT brand, the marque was spun off as a stand alone entity. VW did this in 2020 and it is now recognised as such in most markets. The 34,000 produced in 2020 jumped to 82,000 in 2021. A new model was born but the impetus mainly came from the Formentor.

SEAT: After a 37% drop in production in 2002, a much better -8% was the outcome in 2021 (when Cupra is included, there was a 4% increase). No one model managed to crack the six digit barrier which is surely not ideal.

SEAT / Cupra deliveries by region: As to why the difference between production (above) and sales (below) was nearly 50,000 units I am at a loss to explain. The brand lacks anything like a global reach with 95% of sales in Europe and a few in 'Other'.
The North American figure is just Mexico. The small Asia Pacific figure probably only includes NZ and Singapore. With the Addition of Australia during the year 2022, that should start to look more respectable. In NZ SEAT doesn't seem to be working but Cupra is doing much better. 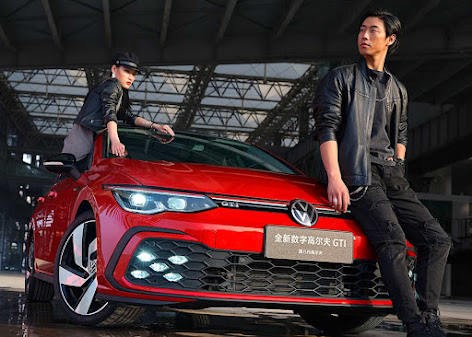 It's nice to see VW open with its data, a policy it has retained for many, many decades. Even more so as volume contracts. As will be revealed in another post, profit is improving at the same time.

Below are production figures, down 19% in 2021 and minus 8% in 2022. Even a quick glance shows that much of the reduction is with medium to large cars, often those for the Chinese market. I always thought VW relied too much on one country. 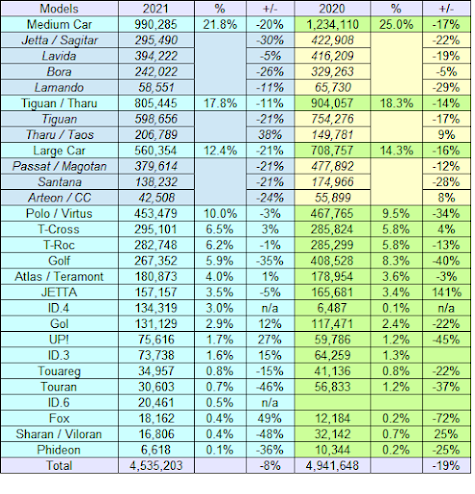 Regional deliveries: Notice this data is different from the above as that is production. The fewer deliveries in the Asia / Pacific region account for the total reduction. It still takes over half the deliveries but is less than a year ago. The current percentage (52.6) is the lowest since 2015.

Summary: VW had a goal of being the biggest producer of vehicles in the world but that seems to have been abandoned. Instead, improved profit is the focus, which is better than being distracted by units made.
Posted by RayCee at 20:00 No comments: