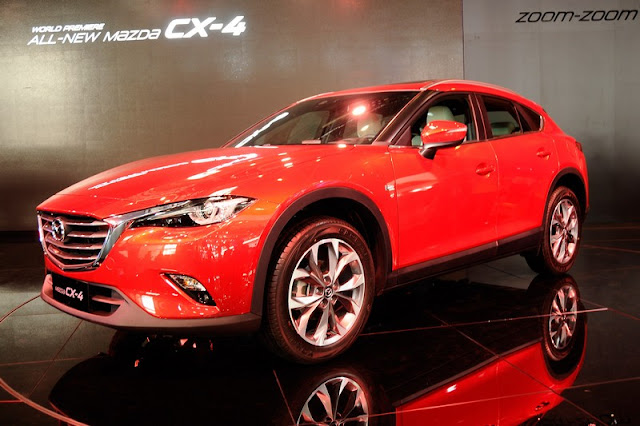 Mazda sold 1,631,000 vehicles in the year ending March 2018. That represented a 5% increase on the previous 12 month period. The biggest selling model has become the CX-5, replacing the long standing 3 model from the top spot. The CX-3 passed both the 2 and 6 models as well, showing the global trend toward the SUV type of car.

The pick up truck (BT-50) which is currently made by Ford sold 36,000 units. 66,000 vehicles were unaccounted for in official Mazda data. This is comprised of several small selling and about to be deleted models too small to list.


China has now become the biggest market with a third of a million sales. The USA is not far behind on 300,000 units. Japan then follows and after that the numbers are quite a bit lower.

North America as a region is the largest although comparing it with China, a nation seems a trend with many manufacturers but an odd one to me. At least we get to find out sales in China.

Jaguar has been on a model offensive and sales have grown quickly. In such a situation, manufacturing capacity is a challenge. Jaguar soon became fully committed and Magna Steyr in Autria was chosen for E and I-Pace on a contract basis. That seemed a sensible solution.

However, suddenly the Castle Bromwich plant in Birmingham will be put on a three day week. Why the sudden turn around? How can that happen so suddenly? There are reasons offered in the media but there is a simple reason. JLR got caught out.

Expanding too quickly. To grow they needed more models, such as a compact car. In the past I often expressed dismay that Jaguar didn't have any SUVs. The reason was Land Rover did them. The move to SUVs demanded they both could do them and we now see that LR hasn't been damaged by Jaguar's late arrival at the SUV party.

Out came the XE a year after the F-Pace, both of which were entering new areas for the marque and benefiting from pent up demand. Before they had time to settle down to what would be their real demand, the E-Pace was coming and a commitment would have to be made as to where it would be assembled. Capacity was tight in the UK and Maga Steyr was chosen. Since then, volumes settled down for the XE and F-Pace which reduced manufacturing demand.

China: With high import duties, Jaguar started making the XF and then XE over there. Jaguar's largest market was now making cars, lessening Jaguar's UK exports to China. The E-Pace will be built there too, despite China now reducing import tariffs.

The diesel scandal. VW started it but everyone within the industry has been affected. The UK move to reduce diesel sales has affected the UK market negatively and caused many buyers to put off a new purchase. This was an unseen development that has impacted on Jaguar.

Increased competition: Premium car makers were basically about three German outfits, with others seemingly caught in the headlights. They've all woken up and lifted their game. Competition is now intense and pressure on maintaining volume an issue.


Caught out: All these above factors have combined to force Jaguar to reduce hours worked. Some they couldn't avoid, others they misread. Expanding the range of vehicles with it's excellent design team was the easy part. Managing the way forward will require managerial expertise. Hopefully they are quick learners and this will turn out to be nothing more than a speed bump. They certainly have been caught out.
Posted by RayCee at 07:50 No comments:

Sometimes fact is stranger than fiction. Often the stuff that comes out of the car industry is like that. What are some of the wierd happenings surrounding JLR? Some recent snippets.

1) In late 2016 workers at Jaguar Land Rover overwhelmingly backed a two year pay deal described by their union as "exceptional".

2) More recently, JLR is transferring all production of its Land Rover Discovery model from the UK to a new plant its built in Slovakia.

I assume lower wages were a major part in that decision. I was thinking a lower priced model below the current range would have been ideal but are probably too far behind in engineering one.

3) The Jaguar E-Pace and I-Pace are made at Magna Steyr, Austria. The E-Pace will also be manufactured in China but neither of these Jaguar models will be made in the UK.

With UK production in decline, I wonder why the E-Pace has no place in UK manufacturing.

4) JLR blamed a collapse in diesel sales for the reason 1,000 workers will lose their jobs and reduce production. the company also claim that profit has also been affected by the decline.

That has been a challenge, but other car makers have had to face it and seem to have coped better.

5) JLR predicts it will spend £80bn in Britain over the next five years but that without a Brexit with the EU deal to their liking then this money could go elsewhere. Ultimately, it could result in UK plants closing.

Out comes the big stick to threaten if they don't get their way. Don't stand near the pram lest you get hit by flying toys as the baby has a tantrum.

Moving production off shore while sales for models made in the UK decline - due to their aging model cycle - is problematic for JLR. I can't recall reading this from any JLR press releases but that would involve accepting responsibility.

When Honda realised that the European car market wasn't suitable to its way of doing business, it didn't close its UK operation. Rather it turned it into a global centre for Civic production, with cars exported around the world. Europe now takes a small part of its output.

This option seems well beyond the capabilities if JLS's current crop of managers. Having moved production elsewhere renders a move such as Honda's impossible. The high wages it thinks it can afford isn't helpful. It's lack of lower priced volume models makes keeping UK factories busy a challenge.

Of course it's easy to blame external factors for business woes. However, going public with them comes across to me as playing the blame game and not getting on with finding solutions. Honda is a case of a company that got on quietly with sorting a problem.

The Chev Camaro started life in 1967 as an answer to the Ford Mustang, which was hugely popular. The Camaro was a success and still is today but it never quite knocked the Mustang of its perch. Considering that GM nearly always outperformed Ford in volume, this was not something the General was used to. (Mustang data can be viewed by clicking here).

The Mustang has been in constant production and averaged 184,000 units, the Camaro wasn't manufactured between 2003 and 2008 inclusive. Even so, for all the years it was made, the average was 128,700. That's impressive in its own right, if you don't compare with the Mustang (like I just did).

There have been six generations of the Camaro, made for North America with a few finding homes elsewhere. They are soon to be sold in Australia and NZ with RHD conversions done by HSV. The numbers won't be huge but it shows that there is demand for muscle cars. The Mustang is already a strong selling model in these parts, helping make a business case for this initiative.

The figures below are from more than one source and I found these were not usually consistent. So they should be taken as reasonably accurate and hopefully the swings and roundabouts effect evens out those differences.

Each series is coloured, with a gap for when there was no production. When one model changed over to another, that generally isn't shown here. As the Camaro was made in both the USA and Canada, that when the change of generations becomes evident. Last updated 18.06.20.