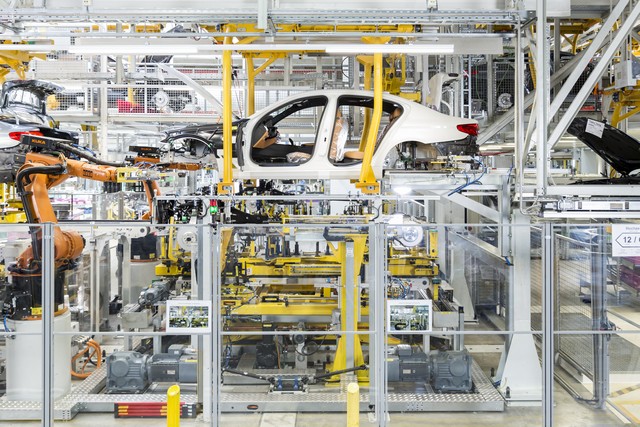 You may not think of Austria as a car producing nation but it does. It has a contract manufacturer, Magna Steyr in Graz. The current companies utilising the assembly operation are listed below. Volume was +69%, but with contract manufacturing, it can fluctuate a fair bit. For now it's on the up.

They made the BMW 5-Series and Z4 sports car. For Jaguar the E-Pace and i-Pace are made and for Mercedes-Benz the G-Wagon. To be making such a diverse range of vehicles is no mean feat. Commercial vehicles are also made in Austria, listed as a total figure. The company concerned seems publicity shy.


The march of the imported premium marques was relentless and Cadillac was moving away from huge barges to cars that were more in line with where modern tastes now wanted. That posed a risk of not measuring up head to head.

Some models were deleted and the new compact ATS was introduced. Overall. sales were holding up OK but not keeping up with the imported competition. The XTS replaced the poor selling DTS in 2013 but didn't set the sales chart on fire.

The XT5 took over from the SRX and CT6 was a belated return of the large executive car. The recent addition of the sub-compact SUV named the XT4 is an interesting addition. All this hasn't stopped sales falling and Cadillac is now the sixth best selling marque in its home market.


Thinks have been good for a couple of years with regard to passenger car production in France. Volume was up 1% on 2017, short of the 8% growth of the previous year. That said, if it wasn't for PSA's new acquisition Opel it would have been slightly down.

Peugeot makes up half of the total, with Renault just over 20%. Interestingly, Citroën make very few cars here, even passed by the slightly upmarket DS marque. As global markets retract in 2019, challenges await car makers.

The UK vehicle manufacturing industry has issues. Locals don't seem to identify with it, either through ignorance or apathy. After years of growth, things have gone into retreat. What are the issues?


Nissan: After booming in Europe, the Nissan brand is in free fall across the continent and that includes the UK. The broad nature of the decline makes it clear that it is a policy of the company. However, I don't see the benefit of knee jerk reactions.

Nissan's Infiniti marque was introduced into many countries to take on the premium market. Then before you could blink, the whole thing was called off and it will retreat to a few markets. A poorly thought out initiative.

Land Rover: VW's arrogant diesel cheating scheme has hit Land Rover, a marque that was heavily associated with engines of that fuel. China sales also hit a speed bump and some production have been moved offshore. All those things conspired to affect LR production in the UK. The new Evoque coming in the second half of 2019 should help things along.

BMW MINI: A ray of light for the industry with production on the up. I would imagine that would level off now.

Honda: A brand that is pulling out of its production in Europe. This caught me by surprise as traditionally Japanese brands do not retreat. However, it made no sense making cars in a region where they don't sell many vehicles.

Toyota: The brand is doing well in Europe so it is simply a question of how to utilise its UK facility. The Corolla is currently the model made there but plans are difficult to make with the pigs ear Europe has turned Brexit into.


Jaguar: Two new models were assigned to overseas production which has impacted on UK production volume. I'd have to call that decision a very poor one, what with ample capacity in the UK.

PSA Vauxhall: This is another situation that is difficult due to Brexit faffing about. PSA would like to know what they are dealing with before committing. What a divisive world we live in. World peace? The environment? Forget it! Humans can't even organise a civilised political divorce.

Other cars: Generally the strongest part of the UK industry with marques like Aston Martin, Mclaren and Rolls Royce going really well.

Commercial: Not a large part of UK vehicle manufacturing. Bus brands Alexander Dennis, Wrightbus and Optare all increasing in 2018. With volume up 8.5%, a nice trend not likely to be sustained.