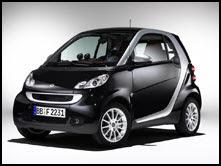 The original idea behind the smart car was that the vehicle would be easy to drive and park in congested cities. It is short enough to allow it to be parked facing the kerb. The car started selling in 1998 with initial sales encouraging. This led to an expanding of the smart car brand with the introduction of the Roadster and Roadster-Coupe in 2003 and the Forfour sedan in 2004.

Smarts were made in France exclusively up to 2004 but then the smart Forfour were produced in The Netherlands. There the car shared most of its components with the Mitsubishi Colt, which was made there also. However The Forfour and Roadster bombed, as consumers found them to be overpriced and not in keeping with the simplicity of the original idea.

The failure led to a dramatic downturn in smart's fortunes, which led DaimlerChrysler's to consider stopping production altogether. The cars were losing Mercedes Benz a bundle of money. However, it has been kept alive around the basic car only, renamed Fortwo which debuted in 2006. With only a slight increase in size, the look of the original city car remained, but the interior and often-criticized transmission received significant changes and safety was improved. So with the new smart fortwo, how does it rate?

What's not: Expensive, auto gearbox still jerky and no manual gearbox; cheap feel to the interior. You can get a decent, small four-seater for less.

Overall: It is so-so on the open road so it's really best used around town.

Why didn’t MB bite the bullet years ago and kill the whole thing instead of stubbornly keeping on going? Maybe it wouldn’t be good for German/French relations. Were the executives too proud to admit their mistake? Pride can hurt you and this car has certainly done that for MB. When smart creators Swatch went to VW to make the car, they wouldn’t. That should have set alarm bells ringing. It didn’t for MB execs and that decision has cost them big time, billions of Euros in fact. It may be easy to park and frugal sipping fuel, but most want more than that and smart just cannot deliver. It proved not to be that smart an idea in the end.
Posted by RayCee at 18:29 3 comments: 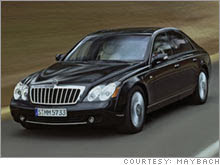 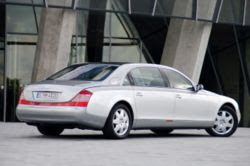 Why has it failed? It’s a limited market anyway, Bentley & RR have more established names and Maybachs are downright ugly to many including yours truly. To think that it could sell the numbers MB thought is amazing. It probably hasn’t cost MB too much as they do not appear to have put much money into it. Why don’t they just put it out to pasture and the old marque slip back into history and leave it in peace.
Posted by RayCee at 20:50 No comments: