Renault has been the best selling car in France for so long. It's also managed to be the top selling brand in its main market Europe at certain times too. Today is a long way from there as it slides down the rankings in Europe and facing being bumped out of its perennial leadership back home.

In 2009, it had a sizable advantage over Peugeot but that lessened as the years have since passed. Regarding traditional cars Renault does well but as for SUVs and especially crossover vehicles, Peugeot seems to have made a better fist of that.

By 2020, the difference in registrations had become negligible and for 2021 Peugeot has pulled clear of its rival. If the year continues as it has been, then a notable change will have occurred in the French car market. Even if Renault was in some way able to regain the lead, it would surely only be a temporary reprieve.

The question now is does it really matter which brand is the top selling one? Yes and no. If the top spot is secured through discounting then of course not. If it can be done in a profitable way, it proves the product is right. In the SUV and crossover area, I think Peugeot is doing that better and that's why it's now at the top in France. 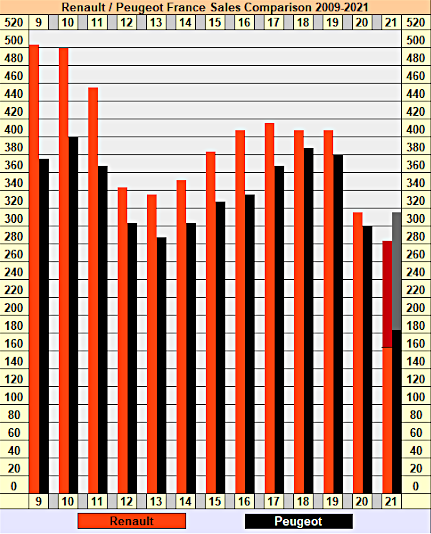