Ford has a policy of moving away from car sales, instead just focusing on SUVs and light trucks. Good for the bottom line but not good for retaining market share. When the process is completed and time has passed to allow an equal comparison, it will provide a basis to see how the new policy is faring. It's the way forward.

I think for the time being it's premature as there are still many people who want to buy a traditional car. If other companies still see value in persisting with them for the time being, why can't Ford? To me, it comes across as a company with a shortcut mentality rather than one that has a strong culture of cost efficiencies.

Now on to the graph and sales figures. Going back to 2008, Toyota had become the best selling nameplate as it was in 2009 but the lead was soon lost in 2010 when Ford made a strong comeback, led by the F-Series. The margin between them was maintained but then it started narrowing in 2017. By 2020, things had got very cosy between the two makes. Ford ending the Focus model was a major factor in that.

The main problem with any predictions for 2021 is what effect supply is having on sales. For 2021, Toyota has opened a sizable lead and extrapolating sales for a full year will see Toyota end the annum well ahead. The plug has been pulled in the Fusion model while the Camry is going well for Toyota. For that reason and others like it, I see this as a swing in fortune that won't be arrested any time soon. 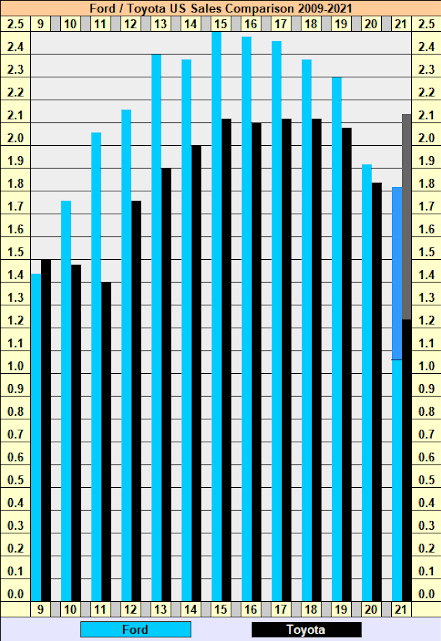