Honda started manufacturing cars here in 1997 so the brand is fairly well established here. In 2004 it hit its straps and reached 3.4% share after taking time to establish itself. Percentage penetration reached a new high of 4.3% in 2006 when the Civic was introduced. It drifted back to 3.4% in 2009. 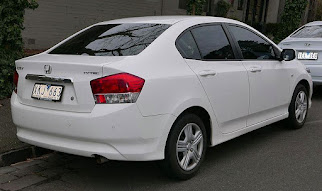 2009: The Jazz hit the market in this year but not with a huge splash. The heavy hitting was being done by the compact City model (picture left), all the others featured in relatively minor supporting roles.

2012: This was a big year when the Jazz and Civic models were retired and the Brio took off. The Brio was a compact 5-door hatchback that slotted below the Jazz in size. 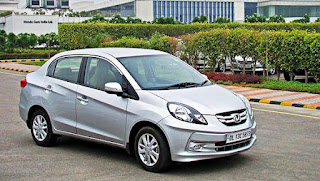 2013: The subcompact Amaze 4-door saloon car arrived (picture on right) which was under the 4 metre (157.5 in) length which puts it in a lower duty bracket. It slotted under the City saloon car. The brand was back to 4.3% share, equalling its record back in 2006.
To read the second installment, please click here. 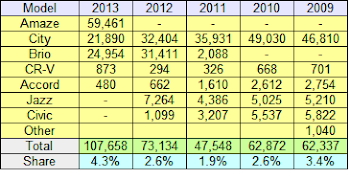