Geo was a GM brand that operated under the umbrella of Chevrolet, hence the term sub-brand. Geo was introduced as a brand in the US from 1989 to 1997 and it seems to have been used in Canada between 1995-97 (can anyone confirm that?). How did Geo start and why?

GM started Geo to compete with small car imports from Japan. It used three suppliers, Toyota, Suzuki and Isuzu to source its vehicles. Most of the cars were already sold within GM but in 1989 then were moved to the Geo brand. So let's look at the model range.

Prizm: It was a Toyota Sprinter model made in the NUUMI GM-Toyota plant in Freemont California. It was either a 4 or 5 door small car. It was only sold in the U.S.

Spectrum: This was based on a small Isuzu I-Mark model and only lasted one year as a Geo branded car. It was made by Isuzu in Japan.

Metro: A super mini model that was a Suzuki Swift (Cultus), it was built at the CAMI 50/50 joint venture plant owned by GM and Suzuki. The factory is in Ontario, Canada.

Storm: It was a 3 door Isuzu sports car known as the Isuzu Impulse or Piazza sourced from Japan. It arrived in 1990 and Isuzu stopped making them in 1993. 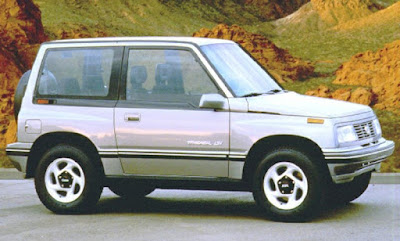 Tracker: Otherwise known as the Suzuki Vitara among other names, this small SUV started as a 2 door car but in 1996 became a 4 door. It was made in Canada at the CAMI plant.

Summary: Geo seemed unusual from the start and it didn't really work out. When Geo was withdrawn as a brand in 1997 and the vehicles went under the Chevrolet name, it didn't help sell any more cars. The models themselves were gradually phased out. The whole idea was a curious case indeed.

The NUMMI GM/Toyota plant ceased in 2010 and is now owned by Tesla. The CAMI plant in Canada is now fully owned by GM (since 2009).

The figures below are U.S. sales only. Canada's part was short in time and limited in volume, adding about 20,000 or so in total, if the 95-97 time frame is correct. The 1989 Tracker sales number is an estimate.