Toyota has made cars in the UK (near Derby) since 1993 and engines at Deeside, Wales from late 1992. Only two models have ever been built there at any given time, with other models made elsewhere in Europe.

It started with the Carina, a medium sized 4-door car which was moderately successful. The Carina was then replaced by the larger Avensis in 1998. I haven't got a split between models in the change over year, but I presume there was some overlap. Just over 400,000 Carina cars were made in five years. 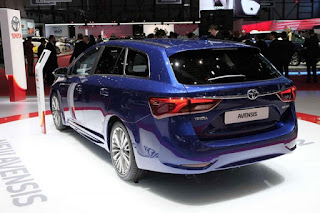 The Avensis came as a 4-door, liftback and estate car (wagon) but the liftback is no longer in the mix. I read recently of a UK rep who drives many cars and said the current Avensis was one of his top three for covering miles effortlessly. To date over 1.8 million have been made in the UK.

Going on to the smaller model made, Corolla production commenced in 1997 and just over 700,000 were made. The Auris then replaced the Corolla hatchback in 2007 and more recently was offered as a Tourer variant as well. A hybrid option is now available, which has proved popular. To the end of 2014, 730,000 had come off the assembly line.

Nearly 3.7 million Toyota cars have been built at the Burnaston plant since 1993 and the 4 million mark should be passed by the end of 2016. The Auris is a solid, well made car that appeals to those who want safe, reliable motoring while the Tourer version adds the versatility that a wagon brings in a stylish way. The Auris range is about to get a facelift, which should lift production numbers.

The Avensis is a fine car which deserves to do better. Sales were good initially but have fallen away of late. It has recently had a major refresh which should assist sales to rebound. If I was considering a large car in Europe, the Avensis would be the first on my list to test drive.

Toyota has taken a measured approach to UK car production. Toyota isn't a huge selling make in Europe, and Burnaston production is almost exclusively for the European market. You would think an SUV model would be a nice addition to the production line.
Posted by RayCee at 08:27