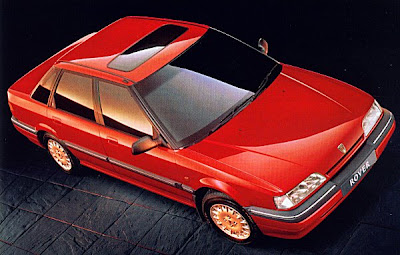 The first Rover 400 (R8) came out in 1990 and was a 4 door saloon (sedan) version of the 200 model. Later a 400 Tourer Estate (wagon) model came along also. The car was a joint venture between Rover and Honda, the latter got the Concerto Model from the collaboration. Being able to produce both cars off the same assembly line bought cost efficiencies for both companies.

Below are production figures for both the Rover 400 and Honda Concerto. The '% 400' column represents the percentage the Rover model got as opposed to it's Honda equivalent. The 1995 year figure is low as the R8 was replaced during the year with the new HH-R model. Combined production for the outgoing and incoming models was 91,200.

Overall, a convincing effort. Some say it was the best 400, and I am thinking so too.