This is the first of three installments, tracking LR sales in the USA.

Despite the fact that Land Rovers have been around since 1948 and Range Rovers from 1970, LR only made it to the States in 1987. Initially sales were only the Range Rover, the Defender arriving in 1993 and the Discovery model in 1994. Below are sales for those years by model: 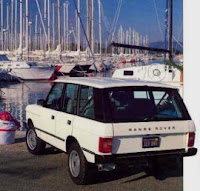 The Defender only lasted until 1998, when new safety rules forced it out of the US market. As for the Discovery, it became the largest seeing model from introduction for the remainder of the sales period above.