I know this is about cars but I'll stray into vans occasionally. 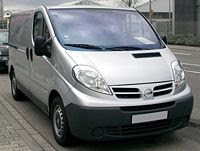 IBC Vehicles Limited at Luton, Bedfordshire, was formed in 1987 as a joint venture between GM and Isuzu and has been a wholly owned subsidiary of GM since 1998. In 2003, IBC became a dedicated commercial vehicle plant and now produces vans under the Vauxhall, Opel, Renault and Nissan brands. Officially, it employs 1750 workers and can produce 18 vehicles per hour or 90,000 per annum. However, 95,000 GM and Renault vans were built there in 2007 so they must have ramped up production somehow.

So overall, it seems a successful operation, which is good to see as it has a long history.
Posted by RayCee at 14:14 No comments: