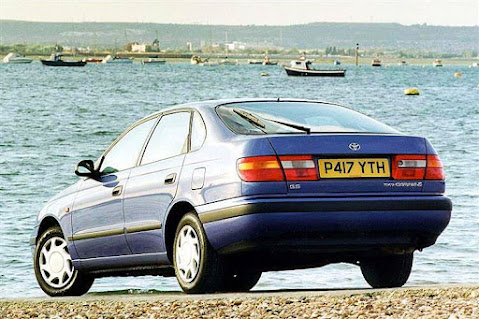 Toyota has numerous plants around the world. They have only ever closed one I believe, in Australia. So that gives security to workers knowing that a facility is in doubt each time a model nears the end of its production cycle.

It started back in 1993 at a time when Japanese car makers were trying to get around duty on cars imported from Japan. The UK was the most popular choice and Toyota was one of three companies that built assembly plants.

The Carina kicked things off (green shading in the Avensis column). As production ramped up, in due course saloon, liftback and estate models were made. In total 467,000 were assembled at Burnaston before it was replaced by the Avensis. There is an overlap year between models in case you wondered.

The Avensis was also with three body styles for the next two generations as sales went along very nicely. For the third generation Avensis, the liftback version was dropped. Volume didn't reflect a new model and the model ended in 2018 as buyers deserted the medium car segment. In all 1,936,500 were made in total over three generations.

Turning our attention to the Corolla / Auris column, which started in 1997 through to today. At first, the numbers were low but by the introduction of the Auris nameplate in 2006 volumes were much stronger. In 2010, a hybrid version was added to the range which has its own column below and the production figure is already included with the Corolla. Initially not that influential but after few years it climbed. By 2020, it accounts for nearly all the production of the Corolla.

4.6 million cars have left the assembly line so far, although current production is below the yearly average of 163,000. It would be more cost effective to have a second model at the plant as has been the case for much of its existence but many factors are involved in such a decision. Maybe in due course a fully electric model will be added. 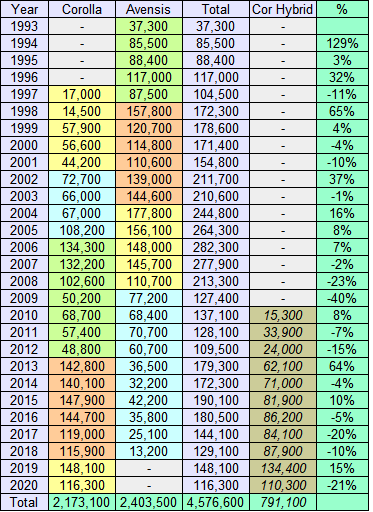 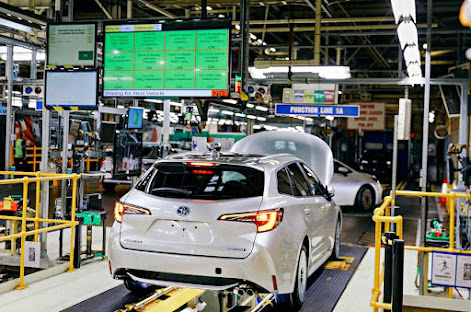