When a human is driving a car, they have their hands on the steering wheel, feeling the car react as the wheel is used. The pedals on the floor also cause fluctuations in velocity. The human is then connected to the job at hand and is fully involved. Of course distractions, over confidence and other factors can intervene, which can lead to accidents. However, a driver feeling the car respond to inputs they make keeps the person engaged.

We are seeing cars being released to the public with Autopilot. They work well on aeroplanes although used for the boring flying parts. I've seen videos showing a pilot asleep while the plane is in autopilot. So how do car drivers react to autopilot? I'm a human so I know.

Once the hands and feet disengage from the controls, the driver immediately starts to disengage from driving. It is impossible for a human to sit in a car, passively allowing the car to be driven for them and remain fully alert. They will not be able to react to a situation anywhere near as quickly and efficiently than they would if they were driving. Even the most alert passive driver will be affected, and the longer they are passive, the harder it will get.

Then there are those who won't remain passively alert at all. They will find other things to do. Read, text, snooze, turn to talk to other passengers, try to find something in their glove box, look at what's going on around them.

Amazingly, some people don't get this, or don't want to get it. They are the people behind making the car self driving. I've discussed some of the problems associated with that at other times (see under label "Safety') but this is focusing on Autopilot. Here is a recent case: 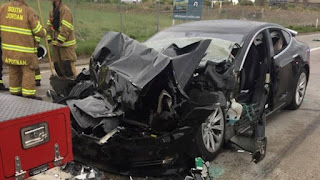 Reports state that a Tesla Model S that went through a red light and crashed into a stationary fire truck at high speed was in Autopilot mode. The driver told police she was looking at her phone prior to the collision and estimated her speed at 60 mph.

The company that makes the car warns drivers using this mode to remain alert and active and to be prepared to take action at any time. You couldn't make this up. No understanding of human nature with that instruction. How can you remain active while the car drives for you? Personally I wouldn't use Autopilot if my car had that feature. It doesn't work with a human driver. There are also too many variables with motoring. I like to keep control because I want to remain actively alert. I cannot do that while the car drives for me.
Posted by RayCee at 01:00