I decided to put a chart together of Ford Sales in the UK by model, the first in the series from 1965 to 1974. Back then there were few models available. In fact the models below covered the full range of Ford cars sold. At the time, all of Ford cars sold in the UK were made locally and were based around the saloon car.

Today cars are sourced from many car plants around the world and the choice of segments has ballooned. People want variety to choose from. The roads today have so many different cars. In the late 1960's, that wasn't the case. Let's consider briefly the models sold then.

The Cortina - which today would be equivalent to the Mondeo - accounted for anything from 40-60% of all Ford sales. This we see below under 'Cortina'. The first colum is sales by thousands (add three zeros) and the second the percentage of Ford sales. In 1967 165,000 cars were sold, achieving 59% of all Fords sold. 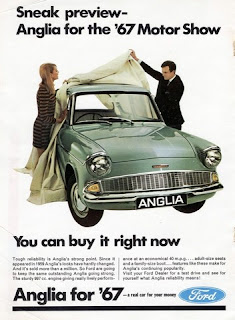 The Anglia became the Escort during this period - now known as the Focus. It took from 26 to 37% of Ford sales.


The Ford Capri was a sporty two door car that really sold well in the UK. For its specialist body style, consistently exceeding 10% of the Ford total was impressive.


The Ford Zephyr became the Granada in 1972. There is no model of this size now, due to cars getting bigger and this large car segment became overrun by the medium segment.


The Ford Corsair was a reskinned and slightly larger Cortina. Sales were quite good but it was an unusual option taken by Ford to run two model so close in size when the range was hardly that broad as it was.

The total column shows total sales by Ford in the UK, followed by the market share it enjoyed. It's share didn't change that much over the time, being more affected by total sales variance.