Thanks to the good folk of BilSweden, we can have an insight into the Swedish car market back in the 1950s. Sweden didn't have a dominant local brand such as VW in Germany and Fiat in Italy. Therefore, the changes in positions in the top 4 are greater, especially that coveted top spot.

Ford (Germany and UK combined) started out top but fell away slightly as the decade proceded. Ford at the beginning of the 50's were mainly from England, with Germany, France and the USA following. By 1959, Germany had just passed England as the largest source of cars, with the US adding some units. 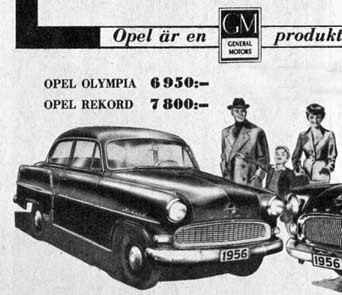 Opel/Vauxhall combined (GM Europe) did well although both brands were selling separately there during those years. That was not uncommon back then, as the cars were different. Vauxhall sales were consistently about a tenth of Opel sales through the 60s. I haven't included GM US sales in the OpV figure, and GM cars from across the Atlantic were very popular in Sweden as well.

VW was up and down, even missing out for two years. Local marque Volvo strengthened as time passed and was well ensconced at the top by 1959. The only other make to get into the top 4 was BMC (Austin 2/1 in sales over Morris).