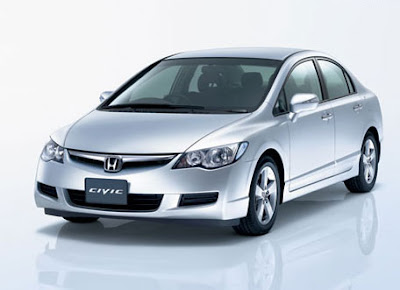 Honda is an independent car company that has shunned mergers and buy outs. It hasn't got into manufacturing commercial vehicles either. For all that it is successful by building cars with good engines and reliability.
In 2005, Honda made 3.3 million vehicles and by 2008 4.3 million, so it is going the right way. World market share was up in the same period from 5.4% to 5.9%. Japanese production of Hondas dropped from 37% to 32%, now 1.264 million. Production by other countries are as follows:

Honda is big enough and international enough to go it alone. I sense the best it can do now is hold the position it has. I cannot see it going on to ever be top car maker in the world, despite that being the intention when Mr Honda diversified in to cars. The world's motorbike markets were conquered, but the motor vehicle industry is bigger and more competitive.

The bottom line: Honda is too conservative to challenge for the top spot.
Posted by RayCee at 20:31 No comments: 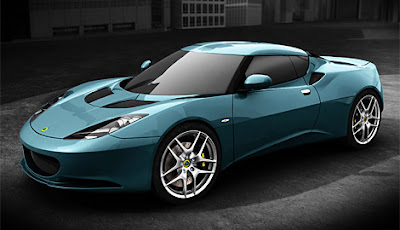 This new model is named after a city in Portugal. Évora is inland from Lisbon and a town of some interest to visit. But I digress. How good is this new car? I haven't driven one or even seen one in the metal but comparing test reports soon gives an idea of what is hot and what is not about a given vehicle.
Starting with the outside, it looks good, very good in fact. Stylish, purposeful and distinctive.

Inside it is a 2+2, meaning it can seat four but limited in the rear pew for space. Quality is up on previous Lotus'. Nice driving position but is let down somewhat by the stereo and satnav. The boot (trunk) is at the rear and is roomy. The handling is superb and the 3.5 V6 engine is good too, although a turbo would give it more thrust. It goes fast when you want to and yet is easy to drive every day, something many sports cars fail to manage on both fronts. Lightness gives good fuel economy and it produces low emissions too.

Lotus expect to make about 2,000 cars per year which is good for a company that only sold slightly more than that in 2008.

The bottom line: A great mid engined car that for the price (under 50k in UK Pounds) has no real competitor.
Posted by RayCee at 18:18 2 comments: 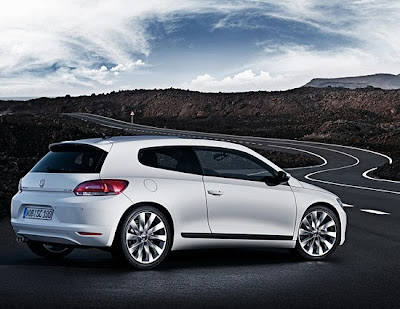 VW has been relentless in it's sales growth. It has been adding to its range of models, been aggressive in marketing and has a reputation for building solid cars too. But perhaps the main factor has been its dominance in the world's fastest growing major market, China.

VW's hindrance is that in too many markets it is still a small player, whereas the company it must beat to be number one - Toyota - is strong everywhere except Europe (and it's not too bad there either). VW has the drive and a wide, solid product range to continue improving it's world market share. It's in the process of absorbing Porsche into the group as well.

The bottom line: Toyota will no doubt be looking over its shoulder as VW Group closes in.
Posted by RayCee at 17:03 No comments: 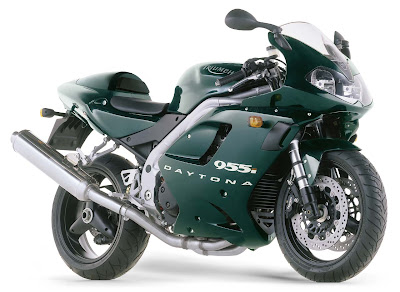 I have never owned or learned to ride a motorbike. My father did and had several scrapes with cars. One day, a lady pulled out in front of him and he hit her front tyre. He sailed over the bonnet and landed on his head on the road. Helmets are lifesavers. Mum put her foot down and said no more bike riding for dad. That was the end of that. There is a side to me that would like to ride and remember sitting on dad’s bikes in the garage as a small boy and pretending to ride. Still, I never liked the idea of riding in the rain and a car seemed so much more practical. Plus having a very protective mum meant I went straight to cars and that is how it has stayed. Nevertheless, one bike manufacturer I always liked was Triumph. The manly noise, the imposing size and the name too all hit a note with me.

It was a German immigrant to the UK that started making bicycles. In 1902, Triumph made its first motorbike. The company survived until the 1980’s by which time Japanese technological advances had led to their dominating the motorcycle markets of the world.

In 1983, when Triumph went into receivership, I thought another British icon of industry going belly up. However, a shrewd businessman, John Bloor bought the name and manufacturing rights off the receiver. Usually these things don’t work, which is why I called him shrewd because he has done a fantastic job of making it work. Initially, Triumph bikes were made under licence in tiny numbers while he hired designers to work on new models. They also visited Japanese factories and modeled the new Triumph production on their techniques. John Bloor spent a lot of money getting everything set up, including a new factory at Hinckley, Leicester, built in 1988. Then came the bikes, one success after another. He did his homework, got good people, spent money and then started reaping the rewards. Not many British businessmen want to go to that trouble to achieve anything, hence why virtually every company manufacturing in Britain is foreign owned. In 2008, Triumph made 50,000 bikes, about 28,000 sold in Europe, 13,500 in North America and the other 8,000 in the rest of the world.

Today, Triumph motorcycles are made in the UK and Thailand (since 2003), a smart move as the cost of UK production is high. All engines are UK sourced however.
This is a success story that too rarely happens in the UK. It shows that the UK has the people to make things happen. The problem is shortsighted investors and management. If you do your homework, make a good product and do it efficiently and reliably, you win. Simple as that.

The bottom line: Well done John Bloor and your excellent team.
Posted by RayCee at 11:09 No comments:

Freelander Does It Tough 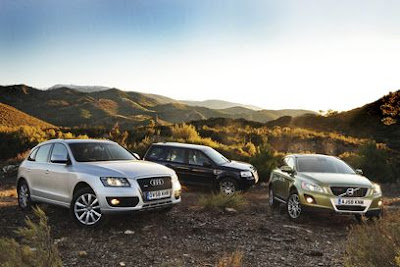 Recently I commented on a four way shootout of smaller SUVs and the Freelander won the contest. Now I have just read in my August 2009 Top Gear NZ magazine about a similar head to head. It was the Audi Q5, Volvo XC 60 and the Land Rover Freelander. They were taken around the Flinders Ranges in South Australia on dusty roads. Nothing too serious but testing all the same.

The conclusion was that had there been just the Volvo and Audi, it would have been a tough call. The final sentences: "But the Freelander makes the choice a simple one; out here in the scrub it is every one's favourite. And for me it does a better job of being both a car and an SUV, and in this segment that's what matters most. Good things do indeed come in small packages."

That is a recurring theme in tests and no doubt is reflected in sales figures. Er, no, not at all. From Jan-July '09, Land Rover made about 17,000 Freelanders, Volvo 32,000 odd XC60s and Audi in the region of 57,000 Q5s. So in essence, the better the vehicle, the less it sells. I don't get that except to say that purchases aren't based on buying the best car, but rather it depends on the badge.

The Freelander is made at Halewood, c. Liverpool, UK. They are about to lose the X-Type from production and the workers do a fabulous job there. The product is top notch too. I hope people get behind this fine product and those that assemble it.

The bottom line: The Freelander is the sensible choice. 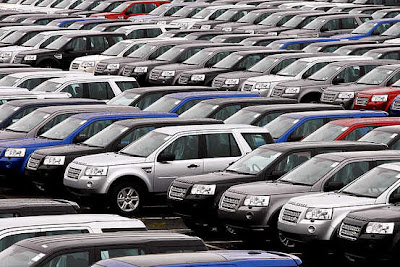 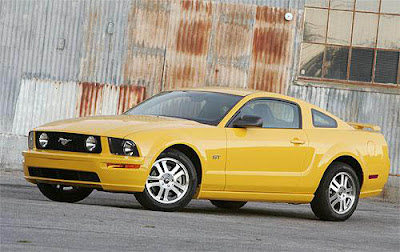 Ford has not been having the best of times lately. It has had to negotiate reduced benefits for its workers in the US and cut back production as sales declined. Back in 2005, Ford had 9% of the world’s car/LCV market but that dropped to 7% in 2008. That is nearly 1 million units less! The 2008 total was 4.75m. 51% of the cars/LCVs were made in the US in 2005, but by ’08, that crashed to 33% or 1.6 million units. This is mainly due to truck sales falling away in large numbers, a staple of Ford US. In most other countries, their share increased of Ford production. Now the following production figures by country:

Ford has been through the pain of restructuring and thanks especially to its robust European operation, is in a reasonably sound position. Sales of late have been most encouraging both in North America and Europe.

The bottom line: Ford needs to stay sharp, as there is still much work to be done.
Posted by RayCee at 06:55 No comments: 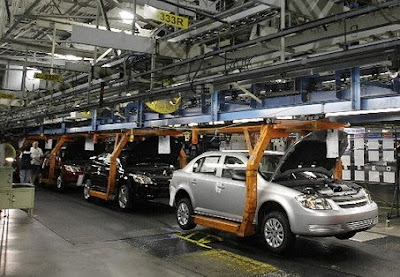 GM understandably had a sales slump in 2008, as it swaggered from one crisis to another. Therefore, for car/LCV sales, 2007 production of 9.2 million slid down to 8.15m for 2008. That's a worldwide market share drop from 13.3% to 12.3%, in production terms. GM has been moving production away from mature markets to emerging ones, which is cost effective. US plants now makes 28.6% of cars/LCVs, down from 37.5 in '05. China now accounts for 12.6% of production, up from 3.9% from '05. Germany is one established country that has held it's share over the previous four years, steady at 5.9%. Production by country listed as follows (OICA) (figures in ,000):

So a wide spread of production locations. Of course, with European operations Opel/Vauxhall in the process of being sold, this will change things markedly. I could have seen benefits in GM staying as it is but it has never intergrated the US/Euro business as it should to save costs. GM is now so desperate, it has no time or money to do so.

The bottom line: Expect a lot more pruning before a very lean GM emerges.
Posted by RayCee at 20:51 No comments: