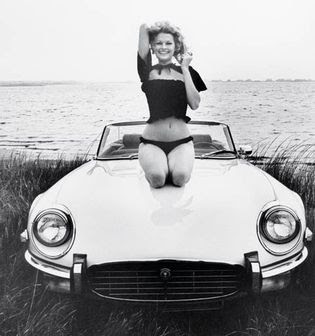 They say that women and cars both keep you poor but I think that is unfair. I mean cars never cost me all that much…. Joking aside, cars do keep you poor while only gold diggers do so otherwise. Guys who lavish so much on their beloved car often have an attractive female or dolly bird too. Even in car shows, young pretty girls are seen on the stand with the new gleaming model. There is some association between the two.

All I can say is that whilst both may have stylish curves and nice shapes, the simple reality is the human form is infinitely more beautiful than any contrivance of man. Putting a woman and a car in the same photo means that the car will always come off second best, and a distant second at that. I suppose it brings the photographers at car shows to the stand in the first place and the attention eventually turns to the car, which is what it is all about. However, as the photo above shows, even a car as beautiful as the Jaguar E-Type – some say the most beautiful ever - comes off a poor second to the model on the bonnet. I don’t think that is what the photographer intended. He should have snapped the car on its own. Then it would have stood a chance of being noticed.
Posted by RayCee at 11:30