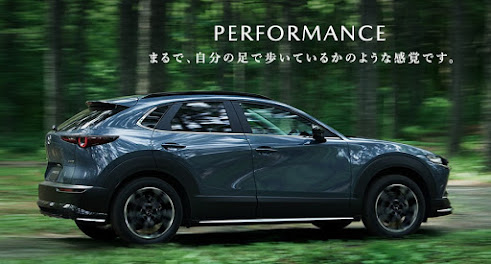 This is a series looking at all Japanese branded models that exceed 7,000 sales considered brand by brand and this is #4. There are many strong selling domestic models in Japan, as we shall see. 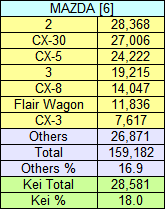 The top selling list is dominated by the diminutive Kei car class. Kei cars account for over a third of all sales, are exclusively local and there aren't that many of them in terms of choice. That is why they are the biggest selling models.
Mazda is the 6th most popular brand and not one model can reach 30,000 sales. However, the range it does have sells quite evenly. The small 2 model just pipped the new CX-30 compact crossover. The CX-30 slots between the CX-3 and CX-5 but isn't called the CX-4 due to already having a model China sold as such. Its lack of a strong Kei range doesn't help. 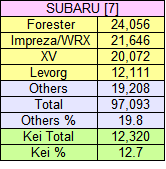 Much of what was said about Mazda applies here. No big selling models but volume among models is similar. Low Kei penetration too at 12.7%, obtaining then from Daihatsu but they sell in small numbers.
Its range seems more focused on overseas markets and export success. It clearly has a small but loyal following locally but with what it has on offer, it's achieving all it can domestically. 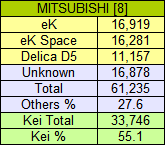 Mitsubishi doesn't have much popularity at home, ranking a lowly 8th. Sales revolve around the two eK Kei models it makes for itself and also for Nissan in the form of the Dayz and Roox.
Apart from that the Delica D:5 MPV van is modestly well received. Models such as the Eclipse Cross, Outlander, Mirage and RVR sell in too low a number to register here. I find that surprising.

Lexus started in 1989 as an export brand to the USA but locally the models were sold under the Toyota brand. It wasn't until 2005 that it entered the domestic scene as a brand in its own right.
Sales have steadily improved but taking market share from established premium marques has been a challenge. Sales are spread across the range quite evenly. 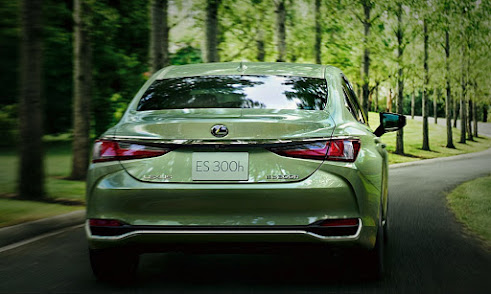