Caterham Cars is a sports car manufacturer in the UK. The only road going model they currently manufacture is the Caterham 7 (pictured above), although they do now do a track car, the SP300R. It is much the same car as was released by Lotus Cars in 1957. That shows how good the original idea was, that it still has a popular following. In some countries, it does not qualify as a road car because of safety regulations. However, it is sold in over 20 countries, according to the website.

The car itself is sold with various specifications but all based on the classic original. Due to a high power-to-weight ratio and its exceptional handling, it has often been used in club racing. They were famously declared ‘too fast to race’ in any open series, therefore usually compete in their own one make series.

Production figures that I have go back to 1997 and are as follows: 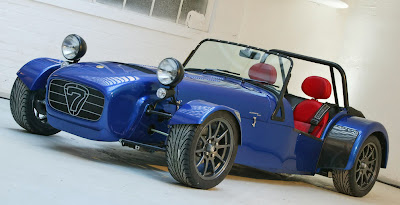 Small numbers but surprisingly steady in a difficult segment to succeed in.

Caterham Cars were located in the town of Caterham, Surrey, UK up until 1987. In that year. it moved to a new factory in Dartford, Kent, UK. They have recently been bought by Team Lotus, a British based Malaysian Formula One team.

In summary: Aren't you glad that Caterham bought the rights for the car from Lotus in 1973, and kept this iconic vehicle in production?
Posted by RayCee at 07:52