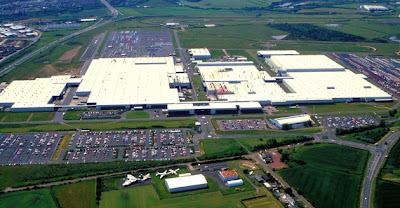 Few mature car making countries have had such change as has the British car industry. Let's look at the reasons, one by one:

Poor management: The running of MGR by both BMW and the Phoenix Four left much to be desired, the company therefore going under and ending up in China.

Plant closures: Ford desided to make the UK the engine making hub for Ford Europe, finishing car making in the UK. Peugeot opened plants in Central Europe and then decided to end many years of car making at Coventry.

New arrivals: Out of the MGR debacle came the MINI, a success beyond expectation.

The future: Nissan (pic above), MINI and LR are near or at capacity. Honda, Toyota, GM and Jaguar could increase, but the Euro zone crisis will mean that will be limited at best. Any growth in these difficult times will be quite an achievement, so I cannot see too much improvement from where it is now.

Enough of the talk, here are the hard facts. Only main brands are included and production figures are rounded for ease of viewing: