The PSA Group came into being in 1976, when Peugeot took control of the the bankrupt Citroen company. Both brands work closely to minimise the cost of car making, but production overcapacity hinders profitability. We will briefly look at each brand and the combined data.

Peugeot: Europe was a poor performer in general but losing market share added to the situation. ACEA figures show a drop from 6.3 to 6%, excluding the former Soviet region. Despite that, the other regions largely made up for that, but for the CKD figure. CKD means vehicles that are assembled from kits and I assume that was Iran. Peugeot went from 57 to 55% of group sales.


Citroen: The similarities with peugeot are striking. Their European share went from 5.4 to 4.9%, even worse. Latin America was a little better than Peugeot and no CKD unit collapse meant the same sales compared with 2012.

PSA: Total sales were down 5% in growing world market. Not ideal but one would think 2014 must be better. Excessive reliance on Europe (60%), too much capacity, political sensitivities to rationalisation, and more aggressive management strategies required all have to be dealt with. Not much really.


Data source: Thanks to PSA.

The VW Group has a strong ambition to be the biggest selling company in the world. I don't doubt that could happen soon, although Toyota may have something to say about that. The figures below exclude VW's two truck making brands, MAN and Scania. That pushes total sales to over 9.7 million. So what do we learn?

VW contributes 62% of total VW Group sales.
Skoda was the only division that went backwards.
Maybe SEAT is finally being turned around.
Bentley was the fastest growing marque.

Data source: Thanks to VW.

VW's drive to be the largest vehicle maker relies heavily on China. It still has some places the world where it is a small player though. It doesn't have the global evenness quite to the same degree of Toyota. Does it really matter who's biggest? Bragging rights are at stake.


The Toyota Group managed a 2.4% increase in 2013, not as much as I expected. It didn't help that domestic sales were down 5%. The figures below are rounded because that is how they are released. So what does the chart below tell us?

Data source: Thanks to Toyota.


The Taiwanese vehicle manufacturing industry managed to maintain its production levels despite sluggish sales at home. It has been able to export to China through a fairly recent trade agreement and this could be a boost to the industry and future investment.

Luxgen is a Taiwanese brand that started making an MPV in 2009, and has has since expanded from that. The marque is the work of Yulon, the same company that makes Nissans under licence.

Data source: Thanks to the TVMA. 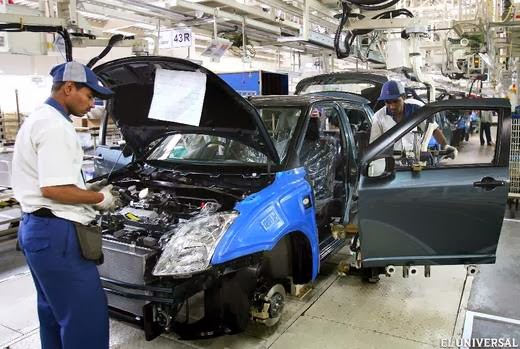 As mentioned under sales for the same country, it has a controlled market with limited imports (you can read by clicking here). Manufacturing should be booming then, but it fell 31%. Mitsubishi did well but how much of that is market or government driven I am unsure.


It is hard to see how it is cost effective to continue making vehicles here. The industry would have to be a large exporter to make economic sense one feels.

Data source: Thanks to Cavenez (very efficient).
Posted by RayCee at 14:46 No comments:


Cars in this Indochina nation are a luxury. They were in all countries once of course. There is a 60% duties on imported vehicles, meaning nearly all vehicles sold in Vietnam are locally assembled. This data is - as it often is for Asia - only locally assembled cars, and comes from VAMA.

A 35% increase is a large amount of growth, with Toyota the leader by a huge margin. Mazda only came on board VAMA this year, while Mercedes data stopped two years ago. Trying to understand some of the sales data is difficult. I am unsure what Xe is, under the Thaco company that mainly sells Kia. A market that is fascinating nonetheless.


Data source: Thanks to VAMA.