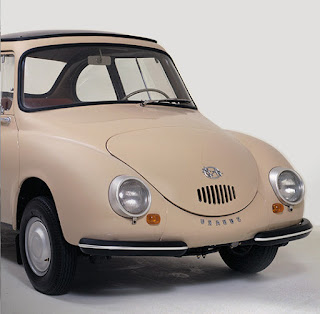 Subaru is an unusual company. It seems too small to exist in today's market of volume production and slender unit margins. They are popular in North America and Australasia but the rest of the world stares in curiosity but rarely buys them. A small company cannot afford excess capacity sitting around idle so getting the balance between demand and production capability wouldn't be easy I would imagine.

It's owned by Japanese company Fuji Heavy Industries (FHI). In 1968, Nissan was obliged to buy a 20% stake in the firm by the Japanese government. In 1999, when Nissan relinquished its share, GM took it. After a few collaborations, GM left and Toyota subsequently obtained a small part of the company.

So what are they making presently?

Impreza/WRX/XV: Just over 300,000 of this compact model were made in 2016. The fifth generation has just arrived and it is the best selling model in the range.

Legacy: The mid-sized model (called a Liberty in Australia) is the next best selling model coming in just under the 300,000 mark. The sixth generation is a mid-sized car in classification.

Forester: A compact crossover now in its fourth genesis, it is based on the Impreza platform. Nearly a quarter of a million were made in 2016. Levorg: As names go, this one is unusual. It sounds like an alien species in the sci-fi world. Having been around since 2014, this mid-sized model could be considered a touring version of the Legacy.

BRZ: The sports car 2-door coupé model was introduced in 2012, made in conjunction with the Toyota 86. Sales are modest but the tie-up with Toyota makes it worthwhile.

Exiga: A compact crossover utility vehicle sold only in Japan and Australia. It seems related to the Impreza and sells in tiny numbers.

Mini cars: They are sold only in Japan as Kei sized vehicles.


Summary: Many of the models seem to be of a similar size and are variants of the Impreza or Liberty. Cost effective and cleverly marketed, they get the most out of a limited R&D budget Subaru would have to work with. They are heavily dependent on North America, where two out of every three cars are sold. That is a record high, in contrast to the record low for domestic sales of just 15%.

The company needs a broader sales footprint, but having Toyota as a shareholder -albeit modestly so - will no doubt bring confidence to the company as it moves forward. It is a niche manufacturer that uses its point of difference to great effect.