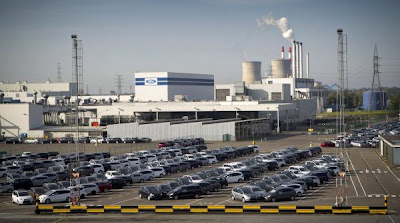 It seems that Ford is to close it's Belgian Ford plant in Genk, which makes Mondeos and S-Max models. This will mean the loss of over 4,000 jobs. Production of the new Mondeo and S-Max will got to Valencia, Spain. Also on the chopping block is the Southampton factory, which makes the Transit van and 500 jobs will go. Most Transit vans are made in Turkey anyway, so this will be seamless. (Since it has been announced the stamping plant in Dagenham is to go too).

To summarise: The decision had to be made and it will hurt thousands of workers. It probably should have happened a few years ago but the hope was things would return to normal in Europe. It is now understood 'normal' is a long way off, or perhaps never to return. I feel for the workers and their families but it had to be done sometime.

Meanwhile over in France, PSA (Peugeot & Citroen) has been given a 7bn euros state handout (er, I mean guarantee) to help it through difficult times. However, the French government wants PSA to reduce job losses and I assume not to close a factory.

To Summarise: No one wants to see thousands of workers lose their jobs, but Peugeot has too much capacity. Surely this decision only delays the inevitable...but perhaps the economic woes in Europe are in fact only temporary. Yeah, right.