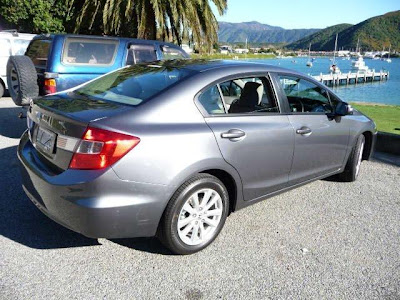 The ninth generation Civic has arrived down under. I remember the first one, a strong selling small car introduced forty years ago. The car has grown and been refined a great deal since the first model. However, this incarnation has hardly changed from the preceding model, despite every body panel being new apparently. Evolutionary you would have to say.

I took a saloon (sedan) model for a run the other day and must say it is a very nice car. It is very smooth to drive, economical, and has a feel of quality. You could drive many miles with minimum fuss and arrive fresh. It has plenty of room within the both the cabin and boot (trunk) areas. I was very impressed. As touched on already, they could have been more daring with the styling, but that aside it's hard to criticise.

The variation that has never been available in NZ is the 5 door Euro Civic....until now. It is just being released and if that model has what the 4 door version has - but with a practical hatch back area - then surely that would be the one to pick. It will available in En Zed at the end of May '12. With the Pound quite weak, there is now a business case to send it all the way down here.
Posted by RayCee at 12:44