The Nissan Juke-R Is Coming....Be Scared 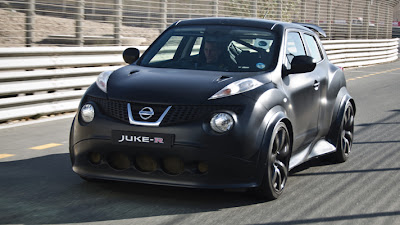 Nissan has decided to put into production its outrageous Juke-R crossover in a very limited run on build-to-order basis. I have been reading about it in NZ car magazines and I thought what a shame it will never reach the public. Well Nissan has the 'you know what' to do things that others won't.

Nissan say: "The 3.8-litre, 160mph Juke-R made its global debut in Dubai in January this year, attracting enormous attention and, as a result, Nissan has now received firm orders for three cars to be built. Two have come from a high-profile and well-respected member of Dubai society. Nissan will build more Juke-Rs upon request and will be taking orders in the coming four weeks, before production starts in earnest".

Gareth Dunsmore, Marketing Product Manager for the Juke, said: "The Juke-R was originally intended as a one-off concept to marry two of Nissan's most innovative models. But the reaction we had to the car in Dubai was amazing - people were making offers for the original on the street!

"With such a strong reaction, and with three genuine offers on the table, we decided we had to make the car a reality. We can't let down enthusiasts who are this keen to add to their collection of cars. The Juke-R has become something of a phenomenon and I'm enormously proud of the impact it has had. There will be more news to come on Juke later in the year."

I have always liked the idea of small car - big engine. We had a Leyland Marina with a 2.6 litre six, and it was so effortless. Not the same thing as this of course, but the over powered idea appeals. Unfortunately the Marina didn't get the chassis work it needed. The Nissan has, and it is manic! So Nissan, if you are prepared to do a very sharp deal for a blog writer down under....

Anyone wishing to register an interest in purchasing Nissan's over powered little Juke should contact Juke-R@Nissan.co.uk. 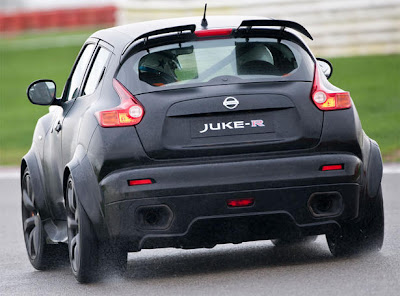