The uneven playing field that is trade never ceases to amaze me. China slaps hefty duties on imported vehicles, which forces anyone wishing to sell cars in any meaningful volume to make them locally. Yet China doesn't face the same duties when it exports. China now has a massive trade surplus, yet the system continues uncontested. 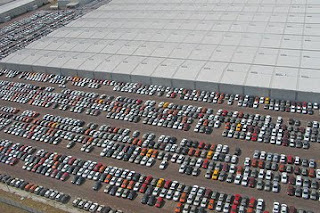 Another country that follows a similar pattern is Brazil. The difference is that it has exemptions such as the trade deal with Mexico, signed in 2002. Recently the flow of cars from Mexico into Brazil has increased dramatically. Mexico has offered to cap imports at their present level. Brazil wants the number of imports slashed by more than a third, as it has a large car making industry it is trying to protect. Brazil may pull out of the trade deal altogether.

The outcome: With China, overseas companies have set up production plants, sold millions of cars and made piles of money. They won't be complaining...until their home markets start to get flooded by Chinese made cars in the future. With Brazil, it's relatively inefficient car industry will be protected by a broken trade deal, if not through mutual agreement.
Posted by RayCee at 09:13