I am one who is critical of the lack of imagination Japanese car makers have shown for some time now. Design is never revolutionary and halo models simply don't exist anymore. Well Toyota and Subaru have finally decided to create a model that will never sell in big numbers but show it still has a little soul. The car in question the GT 86, made in collaboration with Subaru. Subaru, which is now part owned by Toyota, will have its own version named the BRZ. 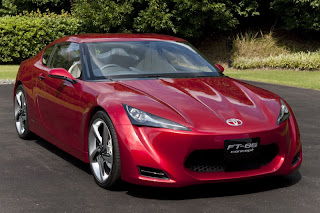 This new sports car has a low centre of gravity, but doesn't have a turbocharger. This says outright speed isn't what it's about, but fun driving characteristics are. How refreshing. This means the obsession with ever more power is eschewed in favour of grin factor handling. I like it. 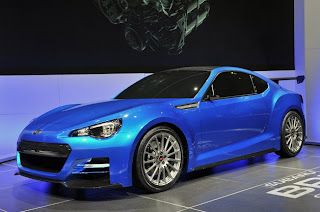 Of course, by two car makers sharing the project reduces cost and between the two brands, they will sell more than one maker would alone. Most importantly it shows that the Japanese car makers may be waking up to the fact that you need models like this to show that a company offers excitement, not just safe and boring.
Posted by RayCee at 06:36