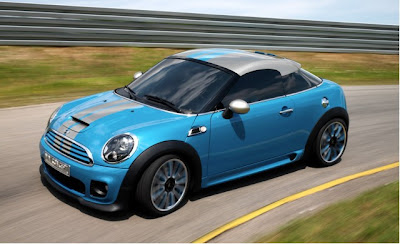 On would have to say that German car companies are aggressive. They don't just exist in the market, nor do they merely compete in the market either. No, they attack it. Take BMW and its MINI brand. It started out as a smallish two door hatch in 2001, the convertible (2005), Mk II (2007), Clubman (2008) and Countryman (2010).

Later in 2011 comes the Coupe, then more variants later. The MINI range is fast becoming like a rabbit warren. The fact is this needs to happen, to keep the MINI range fresh and entice new buyers into the fold. Of course, each new model must be well thought out and the whole range having a purpose for being there. I thought the Clubman was not that well executed (and somewhat redundant now with the new Countryman). One suicide door only on one side wherever it was sold and not that practical either. The Countryman is rather large to be a MINI but for some that will be just what they want.

The MINI range will continue to attack the market aggressively. It will have success and see off the pretenders such as the limp, uninspiring Audi A1. The latest MINIs could be better looking, but unless there is UK design input, unattractive Teutonic style is what will be. That said, the new model range is working and new additions will continue to keep the MINI brand at the forefront of its niche.
Posted by RayCee at 14:17