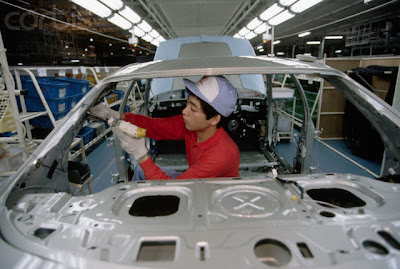 Generally Japanese car making is stable and therefore predictable. Of course, the economic downturn upset the apple cart in Japan as elsewhere. To show this point, Japanese car production peaked in 2006, when 9,750,000 cars were made. It hit a very low point in 2009, when it fell to 6,850,000. Things improved in 2010 as production rebounded to 8,300,000.

The problem Japanese car brands have is the Yen. It was purposely kept undervalued for years to assist exports but forces have conspired to move the currency to a more realistic value. Now making cars in the land of the rising sun isn’t that profitable. How much car making will now move offshore, only time will tell. Thailand is one country benefiting greatly as Japanese firms increasingly look elsewhere to make cars.

In the chart below, car production in Japan for 2010 is shown:

Over the last decade, Honda has dropped the most local production, from 15.2% of all domestic Japanese car making in 2002 to the current 11.3%. Mazda has gained the most, from 8.1% of the total in 2001 to nearly 11% now. This is due to Honda having production going offshore, and Mazda yet to venture in that direction.

What I make of it: Japan will remain a major car making nation, but if the Yen remains fairly valued, then Japanese brands will not be able to afford to make so many cars at home.