The Winners And Losers of 2010

Every year some win while others lose. 2009 had mainly losers due to the overall economic picture but 2010 saw an improvement in most countries. Despite the vagaries of the financial world, a list of winners and losers can always be compiled, even if the up or down is relative to the overall market place. So here are my picks of the winning and losing nameplates of 2010

Volkswagen. They have a good range of vehicles and engines. They don’t seem to have dud models around, whilst the engines are technologically good. Sales of the brand have reflected these factors.

Hyundai/Kia. Admittedly they have a home market virtually gifted to them via protectionism, but the latest cars they are making are very competitive both in quality and value.

Jaguar/Land Rover. With a strong range of vehicles within both marques, sales have been good and profitability excellent. Ford struggled to make money with the brands, but new owner Tata seems to be doing very nicely thank you.

GM/Ford: I classified these together as they have both had a good year after some really bad ones. Ford & GM have reduced the number of brands and they regained much respect in their home market. Most importantly, profits are back for both of them.

Daihatsu. Has done alright in Asia, but elsewhere has spent 2010 retreating alarmingly. It’s a shame as the cars are well made. The reliance on small vehicles that are dynamically challenged means they may end up being an Asian exclusive brand.

Toyota. The world’s largest car maker has had poor press from safety issues and recalls. Sales have been hurt and profits have suffered too. There is nothing exciting on the product range either and especially in Europe people have been giving the brand a big thumbs down. 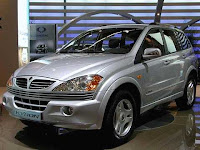 Ssangyong. A company with a poor last few years is still well and truly in the woods. Recently bought by Indian company Mahindra, it still struggles with a range of ugly vehicles that sold poorly in 2010.

Seat. The Spanish brand within the VW Group has sold OK but still seems to sit awkwardly within the company. It struggles to make any money and has little sales penetration outside of Europe.

Saab. Nearly closed down by GM but sold to Dutch company Spyker. Sales have been poor for 2010 but starting to recover now. The new owner has yet to prove if they can save the marque so the sale left me with little optimism. The cars themselves are also off the pace compared to the competition.
Posted by RayCee at 18:06