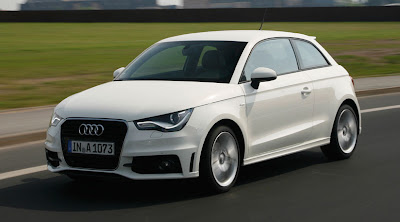 Audi has been on a golden run. It has been closing the gap steadily between itself and the two main foes, BMW and Mercedes. It makes more profit per car than either of those two and plans to soon be outselling both of them numerically. Audi's success is based around the cost savings it makes by putting plush interiors inside VWs and Skodas. I'm not saying that cynically, but because it is true and it has worked.

However, Audi's decision to take on BMW's MINI brand may be about to backfire. MINI started off with a target of 100,000 but has since over doubled that figure. Audi has capacity to make 100,000 units per year of the comparable A1 model, but in the five months of 2010 it has been on sale, will only sell 30,000. Bearing in mind cars sell best when first released, this car has flop stamped all over it. Why?

Some say it is over priced. Others that it doesn't have the iconic status of the MINI. Still others say it is not up to the competition. After reviewing it The Telgraph call it "a wasted opportunity. The A1 is beautifully made and its cabin is the apogee of automotive design and assembly, but you would never consider driving this car for joy alone and the design is instantly forgettable. This is a supermini for bloodless accountants and one that you would buy with head rather than heart".
No wonder it's not selling that well.

The bottom line: The Audi A1 has taken on the BMW MINI, but not executed it nearly as well.