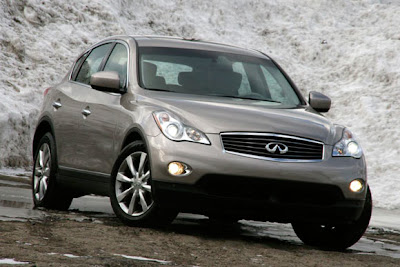 Around the same time as Toyota invented Lexus and Honda Acura, Nissan brought out the Infiniti brand. It was introduced in 1989, and its purpose was have a premium marque in the United States to sell above the Nissan brand, which has a mainstream status. By the end of 1994, a total 200,000 sales was reached and two years later 300,000.

However, by the end of the 20st Century, Infinti sales had not really kicked on, around 75,000 per annum. Infiniti executives told the motoring press at a meeting that they "swore never again to take their eyes off BMW". It has worked at a sportier image which has worked quite well. If we look at the two main markets of the marque, we see it is doing reasonably. In the US and Canada, its sales have been as follows (yr/sales/market share):

The improvement since '01 is marked. Still, compared to comparable premium brand sales, Infiniti is somewhat behind. Nissan is now is trying to take the make to the international market, not an easy task if initial sales are any indication. In the premium market, image is everything. Establishing that takes time and seeing as it is a latecomer in most markets, it will be an uphill climb.

The bottom line: Infiniti is a good brand trying to catch very good brands on the sales charts.
Posted by RayCee at 21:28