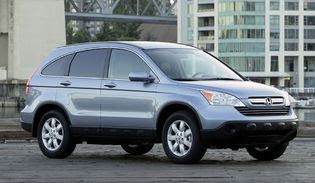 The Honda Swindon site was formerly an airfield and an aircraft production facility where, during World War II, Spitfire fighter aeroplanes were produced by Vickers. Honda uses one of the airfield’s former runways as the on-site test track.

Honda bought the site in 1985 and initially it was a pre-delivery inspection facility for cars built by Rover, then badged as Hondas. Honda then opened an engine assembly facility making units for Honda and Rover cars. Car Plant 1 came started in 1992 and in 2001 Car Plant 2 was added. Initially just over 100,000 cars were made annually, but in 2002, the numbers increased to about 185,000. However, an increase again will lift production to about 230,000 for '07, 135,000 Civics and 95,000 CRVs. Next year should see the maximum 250,000 reached with four shifts. Over 150,000 petrol and Diesel engines are also made there each year, but this figure isn't as up to date as the car production figures. Currently about 5,000 people are employed there.

Late 2007, Honda Swindon produced the millionth Civic. Civic production began on September, 1994 and in that first year just 6,652 Civics were produced. Cars are exported to over 60 countries and Honda has invested £1.38billion in Swindon.
This the only Honda plant in the world manufacturing the Civic 3 and 5 door models. 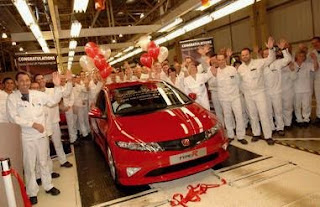