Ugly Cars (In My Eyes Anyway)

They say beauty lies in the eye of the beholder, meaning each individual sees beauty differently. What constitutes ugly is the same. When I look at a car, I immediately get a positive or negative impression. I find German cars tend to be ugly as the design brief seems to put too much emphasis on a practical aspect which over rides aesthetics. So here are some examples of German automotive ugliness:

Mecedes CLS. Look at its side profile. It may be aerodynamic and ride well but the lines toward the rear just look wrong. It's too flattened, the windows look poorly shaped and I'd imagine it would be pretty claustrophobic in the rear seat department. To me it is sooooo ugly. 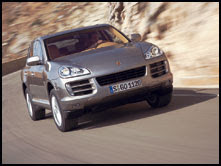 Another ugly car from the Fatherland is the Porsche Cayenne. This car makes a bullfrog look gorgeous. The idea is to make an aerodynamically shaped SUV. While Porsche may have achieved their objective in that sense, ascetically it fails in my opinion. To manage both objectives would not be an easy design to do. Other SUV makers realise that 4wds just are not going to cut through the air like a low slung sports car so they just make them good looking. It's a pity that Porsche didn't understand that. Of course they sell, as some people go for the badge and a typical Cayenne buyer clearly have more dollars than sense. So in summary, while it tries hard, it fails in the looks area.

My final example of über ugly is the BMW 1 Series. Apparently it drives outstandingly. However, that apart, I can't see anything to recommend it. It's proboscis is long to say the least. The side profile looks contrived and the rear seat is a cramped place to be. The chopped off rear accentuates the long snout. That also equals a small boot. In other words, the driving experience is everything, practicalities = 0. It's proportions are all wrong, to the point of ugly.

So when engineering takes precedence over everything else, there is a price to pay. In many cases that means ugly and why cars from Deutchland seem to have a high percentage of ugly cars. British and Italian cars don't go for the ultimate in engineering, but they sure look nicer. In other words, a better balance.
Posted by RayCee at 14:58