SEAT, The Car Brand From Spain

SEAT stands for Spanish Society of Touring Cars. It was founded in 1950 I think as an initiative of Franco for a Spanish car. It ended up basically manufacturing rebadged FIAT cars. In 1900, VW took the reins but it remains a Spanish car company, situated near Barcellona. In 2006, 430000 came off the production lines. Sales have been around this figure for all the 21st Century. Production by model for 2006 are as follows: 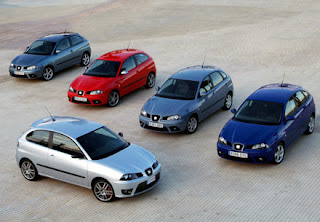 Ibiza: 185000 made. It has been around since 2001 as a 3 or 5 Door hatch. It is well made, has a sporty interior, but doesn't deliver as much driving excitement as it promises. Nevertheless, it is still a good car.

Leon: 130000 produced. Introduced in 2005 as a 5 door hatch back, it is good looking, very spacious for occupants and very good value. Plenty of roar from this 'lion' it seems.

Altea: 60000 manufactured. Around since only 2004, it started as a hatchback, followed in '06 with an Estate model & '07 an MPV. It seems to mark a new era for Seat. Emphasis on a styled MPV, excellent to drive but not outstandingly versatile.

Cordoba: 30000 produced. Introduced in 2002, it is apparently a dull drive & not particularly well-equipped. A real weakness in the range, not doing the SEAT image much good.

Alhambra: 15000 made. Has been on the market since the year 2000 and is made in Portugal. A stylish vehicle, based on the same platform as the VW Sharan & Ford Galaxy, the Alhambra has proved to be highly popular as a result of its packaging, equipment levels, value for money & good build quality. Pity about the sales, it seems to deserve more.

Toledo: 9000 manufactured. This 5 door hatch has been around since 2004. It is reputed to be excellent to drive & good choice of engines, but similar to the Altea. Production numbers have steadily dwindled, which doesn't make sense.

Overall, an interesting brand that somehow doesn’t fit. It has a less expensive Alfa image which only works for some models. Then they throws in an MPV! It sales are flat and probably the most challenging marque of the VW stable. I can't see SEAT becoming big outside of Europe any time soon and it will have a fight keeping it's European share.
Posted by RayCee at 23:05